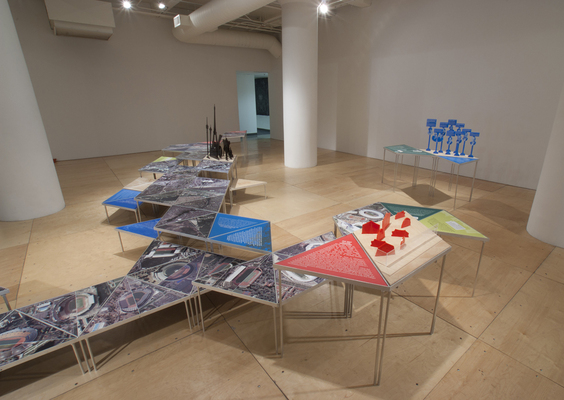 Gallery 400’s double exhibition of “Global Cities, Model Worlds” and “The World Finder Pocket Guide to Hell” is a heavy-handed but nonetheless powerful pair of explorations of mega-events and their unplanned impacts.

“Global Cities, Model Worlds,” the more striking of the pair, is more tongue-in-cheek than it first appears. Referencing children’s and science museums, with bright plastic models and timelines in primary colors, the installation visualizes the implications of mega-events through studies of the Olympic games and world expositions, or World’s Fairs, from recent history. Combining aerial views, Google maps and a set of earnestly-written facts (often written as though for children: “models are tools for imagining the world,” one plastic label declares), “Global Cities, Model Worlds” documents the violence, economic destruction, displacement of residents and environmental issues that result from such events, designed to bring cosmopolitan cred to cities—and prompting questions about what events like these are really worth in culture capital that would outweigh the costs. Several of its examples bear out these questions, such as a timeline charting Vancouver’s semi-farcical history of bidding for the Olympics and the eventual costs to the city when it did host. But it’s the formal tension in this show that’s the most telling, with its colorful, cheerful presentation of dark facts. Combined with the notable absence of any mention of biennales and art fairs in an art show about international yet city-centric events, it seems clear that artists Ryan Griffis, Lize Mogel and Sarah Ross are criticizing the global art world’s bandwagon approach to the mega-event tacitly but damningly.

“The Pocket Guide to Hell” takes as its reference a history museum, displaying artifacts associated with Steele MacKaye’s attempted Spectatorium for the World’s Columbian Exposition in  1893. The back-story here is more enlightening than the exhibit: the Spectatorium, intended to be the world’s biggest theater, was designed to present an epic play about Columbus’ voyage to America (“The World Finder”), using real plants, real water, and a cast of thousands…. before the economy crashed, leaving the theater incomplete. The group Pocket Guide to Hell, which plans to perform an abridged version of the play on February 29 at the gallery, includes a section of the theater, costumes and a personal scrapbook of MacKaye. Despite the tragedy of the story (MacKaye died within a year of the Spectatorium’s ruin), the installation lends a lighter, more personal contrast to the more overwhelming global study in the main gallery. (Monica Westin)