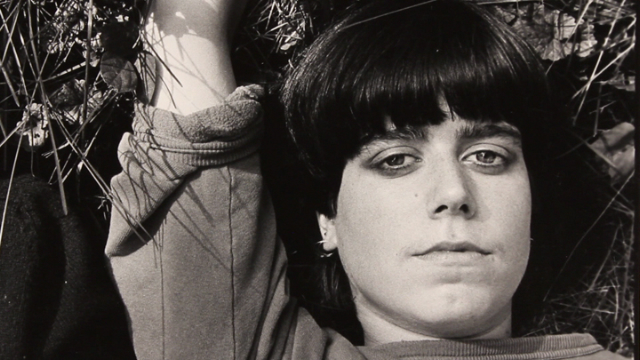 “In the Spirit of Walser” at Donald Young Gallery is a series of exhibitions by artists inspired by the poetic, rambling stories of Swiss writer Robert Walser (1878-1956). The second exhibition in this series features new works by Moyra Davey, including “Subway Writers II,” a grid of twenty-five photographs, and “Les Goddesses,” a sixty-one minute film reflecting on the life of writer and feminist Mary Wollstonecraft. Davey’s artwork, similar to Walser’s writing, balances melancholic introspection against a fascination with daily life.

In “Subway Writers II,” Davey photographs unwitting subway riders engrossed in the act of writing: heads down, shoulders slumped, each subway rider/writer is scrawling notes in small books or in the margins of a stack of papers resting in their laps. These images, and the improvised writing methods they record, speak to the improvised quality of Walser’s writings as well. When Walser was institutionalized later in life, he wrote microtexts in a shorthand form of medieval German on fragments of discarded paper. Davey’s photographs are also “used” in a way, since each image was folded, stamped and mailed to the gallery. Davey’s images also remind viewers that riding public transit provides a rare chance for unstructured thinking, and it functions as a public space for private reflection.

In the film “Les Goddesses,” Davey threads the life story of Mary Wollstonecraft into her own. As she narrates a story about Wollstonecraft and her daughters, Davey flips through a portfolio of photographs she took in the 1970s of her and her sisters. Like Davey’s folded photographs of subway riders, there is a similar emphasis on physicality in her presentation of these images as she awkwardly holds photographs in front of the video camera. Far from illustrating Wollstonecraft’s story with her own images, Davey produces a resonance between them. Pacing her bedroom/studio in New York, Davey relays both life stories in the same monotonous detached voice, which eventually creates confusion about whose story is being told. When Davey reveals poignant details about her own life it is only in passing, before being buried in another round of facts about Wollstonecraft’s own tragic existence.

This even-handed, circuitous telling of deeply personal stories alongside historical information is reminiscent of the writings of W.G. Sebald, a contemporary German writer who was also influenced by Walser. Sebald’s writings have also profoundly influenced other artists included in this series of exhibitions, such as Tacita Dean, whose work will be at the gallery in April. Based on the artists contributing to “In the Spirit of Walser,” the themes of longing and melancholy, endless transit and continuous transition between history and memoir, will undoubtedly be recurring. (Regan Golden-McNerney)