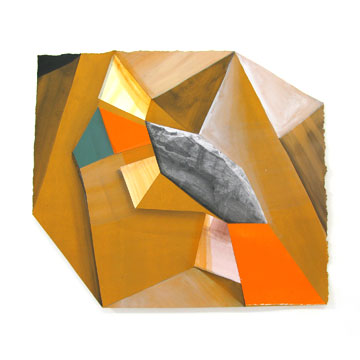 “New Formalisms 2” is curator Abraham Ritchie’s sequel to the 2009 exhibition “Beautiful Form,” presenting four young artists who, he claims, are taking “new directions in formal painting,” but who do seem to be using a playbook that’s been in university art departments for at least fifty years. Whether their work is compelling is another question. Most of the pieces would serve well in a technical textbook on the application of paint in simple, repetitive patterns: as delicately applied to a hand-woven support (Samantha Bittman), heavily applied in adjacent stripes (Todd Chilton) or, better yet, comparatively applied, thick on the left, thin on the right, in bilateral symmetry (Steven Husby). These are all pieces that, like the work of Sol LeWitt, could have been executed by a technician following the instructions of the artist, reminding us that, in the late twentieth-century, formalism became a kind of conceptual art, appealing more as idea than as aesthetic feeling. 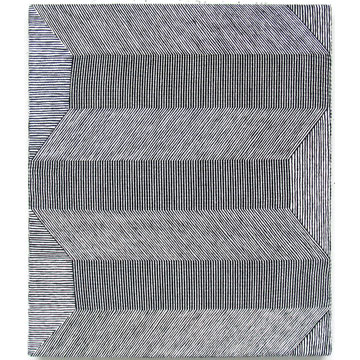 The nearly-figurative collages of Melissa Oresky are something else. They’re passionate, beautiful and entertaining, feeling like set designs for a new Stravinsky ballet that has yet to be written. These are much smaller, more intimate pieces than the wall-sized explosions she showed in her “Tangled Grounds” show at the Elmhurst Art Museum in 2011, and small is good for her, as it bottles up all that energy and makes it more intense.

As the curator has noted, there are many Modernisms that “mutate, grow and live on,” and one might add that geometric painting has been a feature of American art for over a thousand years, as demonstrated by the painted pottery in the Ancient Americas exhibition at the Field Museum, and more recently by the traditional quilters of Gee’s Bend (currently on display in the Rockford Art Museum). Probably all of these artists and their collectors, both ancient and modern, have taken great personal satisfaction in the careful, even compulsive execution of geometric lines and patterns. But only occasionally does this work really dance and sing. (Chris Miller)

Donate to Newcity today and your contribution will be tripled!
+