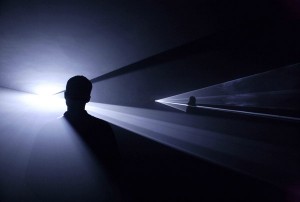 Installation artist Anthony McCall’s manipulation of light and air does not conjure up space so much as concentrate it. By filling pitch-dark galleries with haze or mist, McCall builds up many chambers of light from projectors emitting geometric line animations that cut across the gallery and onto the wall or the floor. It’s easier to picture the installations if you imagine the artist as an architectural alchemist, transforming the invisible things that are already present in the room into solid space. Although unassuming and quiet at first, walking into one of McCall’s installations is like entering an optical playground. Viewers are encouraged to interact with and pass through the immaterial “sculptures.”  An upcoming two-day exhibition and symposium, “Phenomenologies of Projection, Aesthetics of Transition, Anthony McCall 1970-79, 2001—” curated by Michelle Menzies, spans nearly thirty years of McCall’s light works. Marking only his third extended exhibition in the States since 2003, it’s a wonder why McCall isn’t a more familiar name.

As the date-range of the show suggests, there is a lag in time between the two bodies of work being exhibited. While the work from the 1970s relies on analog production, and the more recent works are digitally scripted, the gap is also due in part to McCall’s twenty-year hiatus from the art world.

In many ways, McCall’s re-emergence jumps the “transition” in the technology of his medium altogether. Now strictly working with digital production, the recent works on view in the exhibition are a direct continuation of the “Solid Light” series he began in the early 1970s—although those pieces had no need for any added atmosphere (since you could smoke in galleries back then). 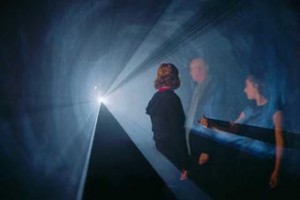 By pairing these two veins of work, Menzies presents McCall’s practice in a way that engages viewers at two points in history. “Line Describing a Cone,” from 1973, is shown in both analog and digital iterations. Starting with a wavering dot that beams horizontally across the space, the original celluloid animation slowly develops a line that traces the circumference of a circle onto the wall, carving a volumetric form through the fog. The piece has a dramatic configuration, which, unlike the digital projections that carry a matrix of light demarcated by an algorithmic waxing and waning of forms, has a specific beginning and end. There is something mesmerizingly alien in experiencing McCall’s work—a mystery that his recent “vertical works” share by projecting curvilinear imprints onto the floor from some twenty meters up, casting what resembles luminary hieroglyphs.

“No documentation can really convey what’s at stake in this work,” says Menzies. “To make a distinction about what is different between the digital and the analog installations is up to the spectator.” With the smallest number of moves possible, McCall’s spectral sculptures impressively create boundaries out of what often remains unseen—an act that elegantly recalls a history of light in art, and expands its potential. (Stephanie Cristello)