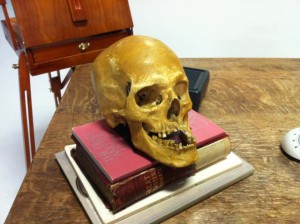 Joshua Kent warned the audience that there would be two deaths during his performance that took place February 3: one poetic and one actual. After passing around a human skull to iterate this fact, Kent raised a cleaver above a flopping fish, and the spirit of a collective gasp hung in the air. Heads turned and fists clenched. In the silence following the mortal blow, about five people stood up and left the performance space.

The fish, a small, dark Oscar, would not feed anyone that night, its death serving a purpose more symbolic than functional. Questions of ethics arose. Was the ending of a life necessary to realize the artwork’s goals? Should its death have been allowed, and, if not, who should have stopped it? If we accept that the death was warranted, at what level of the hierarchy of life (the order of which we might all disagree) should we draw the line—perhaps, at life bigger than a breadbox?

An audience member I spoke with, the first to walk out, wished she had interrupted the irreversible act. Yet, the assumed responsibility of the art venue, Defibrillator, in Wicker Park, as well as the hopeful possibility that the killing was a fiction, factored into her decision to let the show go on. She, however, would not stay. 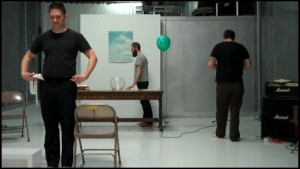 Kent says he would have welcomed an intervention as an antidote to a culture that, he reflected, often undermines individual agency. He challenged this tendency by requiring viewers to make a choice. The performance, titled “Of a door, neither open nor closed,” ended when audience members decided to leave, while the performers sat quietly alongside, waiting. Concomitantly, the option to walk out at the fish’s execution, in retrospect, seemed built into the performance’s logic, creating a strangely omniscient framework. This mirrors Kent’s message that there is, ultimately, no choice in death. It may be traumatizing, sad, and unfair, but it cannot be stopped, even if this particular fish could be spared. The futility and simultaneous imperative of action in the exhibition parallels its subject matter in ways both frustrating and true enough. (Lee Colon)