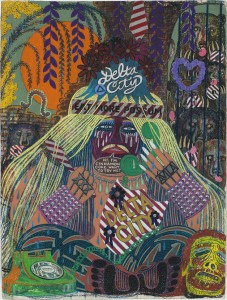 Devotees of carnivals, flea markets, roadside attractions, and the Chicago-based artist collective the Hairy Who will find much to appreciate in the awe-inspiring “Delta Donuts, Migraine Weather” exhibition by Brooklyn artist Alex O’Neal. His wonderfully exuberant oil pastels, graphite drawings and paintings make one feel giddy as if experiencing the smells, sounds, and bright lights of Bourbon Street. In the main gallery, one is greeted with a fantastic colorful, patterned array of primarily small imagist works filled with eccentrics, raccoons, jewels, acorns, owls, rotary phones and more.

O’Neal’s work embodies the unique and quirky nature of a world both recognizable and one of his own vivid imagination. Building on his earlier Delta works, these new pieces portray the semi-fictional characters and haunts of O’Neal’s Mississippi roots, peppered with donuts and migraine auras. While he captures an innocence that he states was inspired by the unfettered artwork of his former elementary-school students, O’Neal’s work has a decidedly dark underbelly. These whimsical yet disturbing visions permeate the viewer’s psyche, becoming indelibly etched into one’s memory like the imagery from a David Lynch movie. 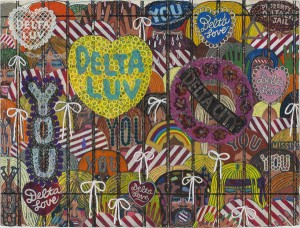 As an artist who has experienced the visual disturbances of migraines, referenced in the exhibition’s title, O’Neal translates this complex sensation into disarming yet playful patterns. In the migraine pieces he effectively uses vibrating pulsations of texture and line to enshroud the kitschy heroes of Delta City—the lines seemingly containing the heroes’ manic, unbridled fervor.

“Delta Citizen” depicts the bejeweled, wild, teary-eyed voodoo matriarch of Delta City, surrounded by a cornucopia of bears with peppermint-striped donuts. Who or what is on the other end of a vibrant green phone? Perhaps it is reality rearing its ugly head, awakening the goddess from her flea market reverie and sugary donut-induced super heroine dream. (Betsy Van Die)