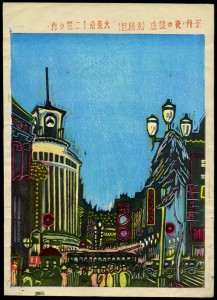 Japanese prints are not especially intended to be framed and hung on walls (although they can look quite nice there). They have been made to be collected and shared, on special occasions, with fellow collectors, like kids do with baseball cards—and no kid has ever been more enthusiastic about his collection than Elias Martin is about his Sosaku Hanga prints, from the early twentieth-century art movement of self-carved, self-printed, wood-block prints. A single class in Japanese art history at DePaul University lured him away from postgraduate studies in continental philosophy and got him hooked as a collector. Now, he works for the dealer for whom he was once a customer, but still remains mostly a wide-eyed enthusiast, as is apparent in the occasional seminars that he conducts in the elegant library above the Floating World Gallery in Lincoln Park. There is no sales pitch because none of the prints are for sale. They all come from private collections, including his own, and with an intensity bordering the fanatical, he paces around the room, holding each print up to the eyes of everyone in attendance. It’s quite a show. No frame, no mat, no protective glass—just one delicious print after another, accompanied by informed chatter, until everyone has reached the limits of human attention and visual satiation. From one seminar to another, all eras of Japanese printmaking eventually get covered, but it’s obvious that the fiercely independent artists of the early twentieth-century really fascinate him, some of which will be included in his next seminar, “Bright Lights, Big City.” His discussion will touch on various themes of westernization, Modernism, militarism, urban planning, identity and gender, among others. But the real subject is the prints themselves, often in the best possible condition, and always a feast for the imagination. (Chris Miller)

February 25, 1pm-3pm at the Floating World Gallery, 1925 North Halsted. Admission is free but reservations are required.