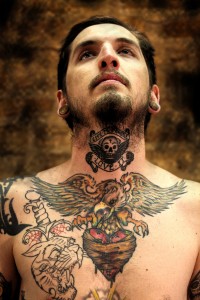 Fusing culture and flesh, the tattoo exerts a fascination, even now that it has become commonplace: Why do people mark themselves permanently with a symbolic and aesthetic commitment, as though they would never change? Judging by the thirty-seven black-and-white (why would anyone do that when color is intrinsic to the impact of the tattoo?) and color images by fifteen photographers, there are as many reasons as there are impulses. Some want to turn themselves into art, as Jose More shows with telling effect in his close-up study of an elaborate crosshatched design that has been abstracted from its human medium so thoroughly that we think we are looking at a tapestry, but for tufts of hair peeking out. Others have something to announce to the world, as with Caitlyn Eakins’ portrait of a young man who has the credo “Believe in Yourself” emblazoned across his chest. And then there are the tough guys declaring how dangerous they are with menacing symbols, as in Simon Wolak’s portrait of a lad adorned with a death head squarely seated on his Adam’s apple. And there is so much more in this paean to the human tragicomedy. (Michael Weinstein)