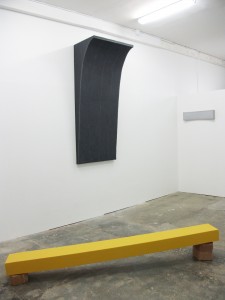 Steeped in the art historical practices of Minimalism, Jon Waites’ solo exhibition “Radical, Work” combines his youthful preoccupation with skateboarding and the basic forms of the notable movement. The work challenges some basic assumptions of artistic practice, such as the sculpture/painting divide, while based in a vernacular of skateboarding.

One untitled work mimics a skating ramp. Made of grip tape on plywood, the piece suggests function while simultaneously mocking any notion of utility by hanging ceremoniously on the gallery wall. Other works, such as “Gnarly Third” and “Gnarly Redo,” use variations of the same palette and geometry. A green tangled mass, represented in both sculptural and painted form, suggests the motion, twists and turns involved in the sport. The works are appealingly narrative and formal. By using skate wax, concrete, wood, latex paint, acrylic and cotton in his artworks, Waites integrates the elements of skating and also transforms them into formal objects in a gallery. (Tara Quell)