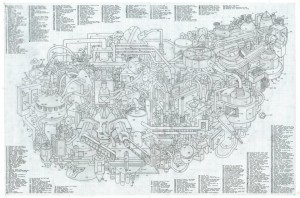 The act of organizing in times of chaos can be deeply cathartic. Putting everything in its place offers peace of mind as wars are waged, relationships fall apart and the economy collapses. Brooklyn-based artist Justin Amrhein’s works on paper confront such social ills through a diligent process of systematization, in his first solo show in Chicago. Watching him wrangle temperaments, political systems and minutia into color-coded charts warrants a giggle as well as reflection on the facets of life that can and cannot be neatly arranged.

Each painstakingly executed drawing features a labyrinthine diagram, ostensibly for future production. Upon closer inspection, however, the individually labeled multitude of parts seems difficult to manufacture. In “Praying Mantis,” a mechanical version of the insect, even its “evil seductress reputation” and “cannibalistic-lover power” are accounted for beside fan belts and hard drives. In the inclusion of such nonmaterial concerns, Amrhein duly acknowledges complexities that go beyond the blueprint.

Humanity lies at the center of the elaborately sketched machines, where it operates as their beating heart and raison d’être. At the core of his wall-sized plan for a weapon of mass destruction (“WMD R225C7, W11”) he invents a hand-written scroll that, according to instructions, should be no more than 7/8ths 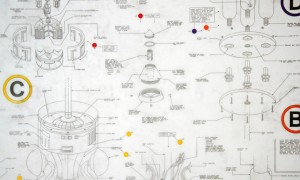 of an inch thick. Here, the hypothetical attacker may offer an explanation for use of the lethal bomb; Amrhein suggests revenge, religion, fear, oil or hate. Both funny and incisive, the artist’s notes do not always present mankind in flattering light, yet do not slump into cynicism.

From across the gallery, the illustrations look precise and almost computer-generated but, up close, fingerprints and faint smudges surround the hard lines of his graphite assemblies. These marks in the context of Amrhein’s subject matter, including warfare, raging politics and global warming, render his exertions intimate and even therapeutic. (Lee Colon)