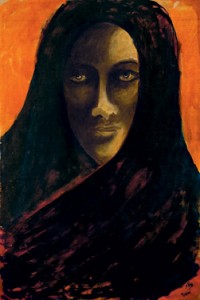 Rabindranath Tagore made some wise decisions when he embarked on his career as a painter at the age of sixty. Already a world-famous writer and something of a Bengali national saint, his work was going to attract international attention, regardless of what he did. So he made it as simple as possible, limiting his visual vocabulary to what he could handle and encouraging free association by not giving names to any of the works.  There’s a pleasant, rhythmic, blurry, dream-like quality to his colored-ink drawings, which, though not very exciting, gradually become more appealing as they build familiarity with the great soul that dreamed them. Tagore was indisputably one of the great souls of a century whose history was torn by paranoid tyrants. He was a sage and teacher, respected in the Hindu, Muslim and European communities for his vision of the planet as a stage for universal self-development, rather than sectarian strife. Like many untrained artists, his work offers sincerity as opposed to virtuosity, but, unlike most of them, it’s not about a self that’s been alienated or traumatized by the surrounding world.

His drawings are about the mystery of our planet and the people passing through it. His landscapes invite you to join his immersion in the humid tropical canopy; his portraits invite you to see into specific people, sweet or cantankerous; his group ensembles feel like scenes from a novel, as envisioned in the imagination of a reader. It’s a show that gets better the longer you hang out with it. But it also reminds us just how seldom we ever get to see twentieth-century visual arts from the countries now called India, Bangladesh and Pakistan. In the entire history of the encyclopedic 132-year-old Art Institute of Chicago, this is the first one-man exhibit of either paintings, drawings or prints from an area that’s home to nearly a fourth of the world’s population. The only group show of modern work was one of Indian paintings from Tagore’s personal collection, mounted in 1916, three years after he won the Nobel Prize for Literature. (Chris Miller)

Through April 15 at the Art Institute of Chicago, 111 South Michigan.