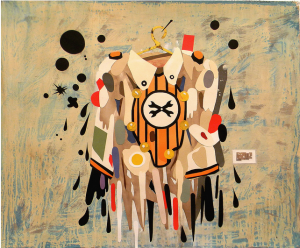 As guest curator of “Someone Else’s Dream,” John McKinnon acknowledges the history of the Hyde Park Art Center. Works from Gladys Nilsson, Jim Nutt and Christina Ramberg—who exhibited at HPAC in the 1960s—make appearances. Situating them next to more recent pictures, McKinnon (who operates The Society for Contemporary Art at the Art Institute of Chicago) articulates that he wants to “create new associations of the work outside of a predictable historical analysis.” The nature of these associations in the exhibition is open for interpretation, like a series of dreams.

Certainly, the distortions of human figures in many of the works look like the stuff of cold-sweat-inducing nightmares. José Lerma and Hector Madera-Gonzalez’s sculpture “Bust of John Law,” the most eye-catching work in the room, stands eight-feet tall. It reproduces an adjacent portrait of the Enlightenment economist as a recognizable but bizarre pile of paper pillows. Lerma effaces his subject, blurring features into splotches of color. Across the gallery, Richard Hull seems to be doing the same thing. However, the fact that any of these abstract objects strike us as portraits testifies to the grip of the human figure on our psyche. They embody Freud’s uncanny: the familiar (human form) returning to us as something horrifying. 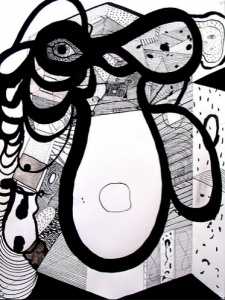 Much of the enjoyment of this exhibition arises from the process of trying to decode the more subtle weirdness of ordinary experiences depicted in dreamscapes. Egg yolks, horses and cartoonish blobs make several appearances in TL Solien’s colorful collages. In Martin McMurray’s series of six menacing pencil works, characters repeatedly find themselves in cramped everyday spaces populated by exaggerated, but clearly human, bodies. These pictures resonate with Ramberg’s schematic drawings which, in this context, seem like inventories of dream objects. She calls attention to our own role as cataloguer, investigator or psychoanalyst when trying to make sense of the unconscious.

After all, dreams take the everyday and run it through the filter of the mind, producing wildly different results. This exhibition reminds us that a dream is just someone else’s reality, remade. (A-J Aronstein)

Through May 6 at Hyde Park Art Center, 5020 South Cornell.