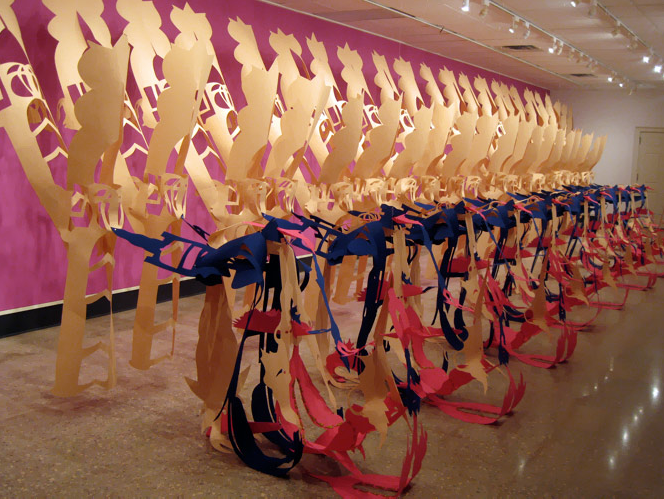 The Pop-Up Art Loop program, which has been operating temporary exhibition spaces for contemporary artists in vacant downtown retail spaces under the auspices of The Chicago Loop Alliance (CLA), recently marked its two-year anniversary. Based on similar models in New York and LA, property owners receive a tax write-off and free space maintenance, and the Loop has less unsightly abandoned storefronts. Beyond these practical benefits, what tangible effects has the program had on Chicago’s artists and its culture in general?

Both “walk-by” and “walk-in” gallery spaces are available for artists, who must submit an exhibition proposal and, once accepted, are paired with an appropriate space by the CLA. Participants have ranged from local art-school students to internationally recognized artists having both solo shows and curated exhibitions. While the ethos was originally focused on the “temporary,” local institutions have taken root in several spaces, such as the Hyde Park Art Center (at 310 South Michigan, now a bicycle-rental shop), Chicago Photography Collective (now a consistent feature in the Block 37 mall), Chicago Artists’ Coalition (whose member artists occupied many of the spaces when CAC was involved in the program), and Columbia College. These institutions either help facilitate artist placement or they limit the chance for non-affiliated artists to stake a space. Currently, only about ten-percent of artist proposals are being accepted by the CLA due to limited availability, and while the CLA gives preference to local artists, recognized out-of-town artists are brought in to draw larger audiences and attention to the program, such as Minnesota-based artist Liz Miller.

Pop-Up Art Loop promotes the program with postcards and monthly gallery walks during warmer months. However, unlike a commercial art gallery, exhibiting artists are responsible for their own staffing, promotion and marketing. Most artists hold an opening event and send out postcards and emails to their personal mailing lists. Organizers usually staff the gallery with help from volunteers or interns, where previously the CLA provided paid staffers. At its zenith, Pop-Up Art Loop had more than twenty galleries, while today that number is nine.

Overall, participants seem very happy with the program. With an abundance of eager artists in Chicago and few free, accessible exhibition opportunities, most participants feel grateful to exhibit in the high-traffic locations. The process requires enormous amounts of free labor, including preparing the gallery, installing work and providing support throughout the exhibition. Although the CLA does its best to provide functional space, one artist said her space required extensive cleaning and preparation to get into proper condition for exhibition. On the other hand, artist Richard Shipps has established such a great experience that the landlord of his 220 South Wabash Pop-Up has asked him to stay. A year later, Shipps uses the gallery as his studio in addition to holding group and solo exhibitions of his cut-paper sculptures. 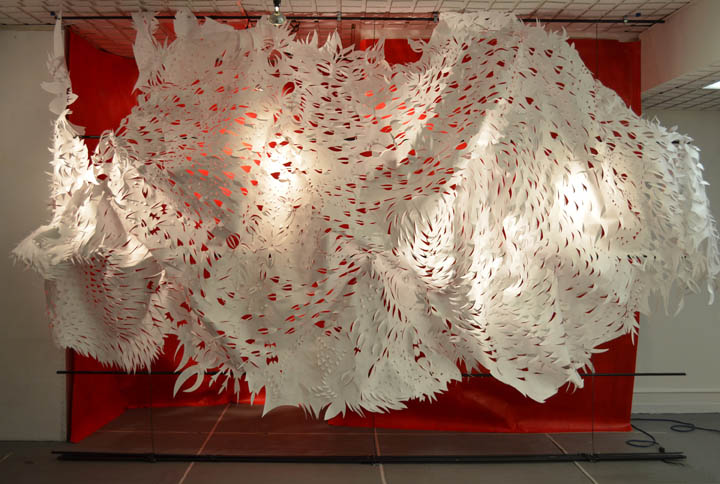 The volume of pedestrians in the Loop still suggests untapped potential for the galleries. On average, galleries get fifteen-to-twenty-five visitors per day. In contrast, the last gallery walk (marketed directly by the CLA, unlike the individual galleries) attracted nearly a thousand visitors. With high-profile cultural venues such as Millennium Park, the Art Institute, Chicago Symphony Orchestra, and the Chicago Cultural Center in the area, the potential to draw relevant audiences is huge, but the Pop-Up galleries seem to struggle for attention and relevance. Many remain unaware of the galleries’ presence. Heavier marketing by the galleries themselves, perhaps to local office buildings, could also foster more involvement by the thousands of Chicagoans who work in the Loop, but who may not recognize the importance of the visual arts within the city.

A new curator and program manager looks toward the future. Tristan Hummel, who took over the position in December, comes from an art background and brings expertise in and enthusiasm for alternative art spaces. Going forward, he hopes to develop a network for area artists rather than having an artist come in, show their work, and disappear from the Loop. On the other hand, nearly all of Pop-Up’s gallery space is currently available for lease or purchase, and a boom in the downtown real-estate market could wipe the program out, begging the question: are the Pop-Ups just space filler or can they have staying power? (Anastasia Karpova)

No one expects that the pop-up program will be the great “big break” in an artist’s career–or that it will last forever–but it’s a great example of a win-win-win for emerging artists, the business community and the city of Chicago.