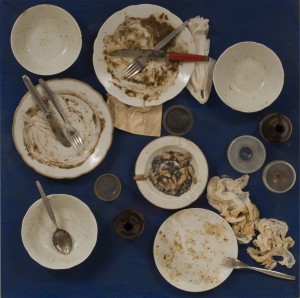 The long black hair that I pulled from my Pad Thai confirmed that it was a lunch like no other. Rirkrit Tiravanija, who has made an international art career serving free meals, often Pad Thai, to museum goers, did not intend for the hair to disrupt my experience of his performance lunch in 2008—or was the hairy blooper a disturbing reminder that no matter what we eat, someone else, often many people, have touched, groomed and manhandled our food so that it appears, on our plates, so perfect?

The free lunch is now an established genre of contemporary art, and the Smart Museum’s exhibition, “Feast: Radical Hospitality in Contemporary Art,” arrives right on the heels of the foodie revolution. But this retrospective exhibition of eighty years of food service is not about fresh, local, healthy, or even tasty food, nor is it about haute cuisine, world hunger, obesity, genetically modified ingredients, or organic farming. Instead, “Feast” identifies a strain of performance art, which climaxed during Happenings in the 1960s and feminist performance in the seventies, that uses a familiar setting—eating in the company of others—as a device of social confrontation and political disruption.

The exhibition is stocked with these ingredients and dishes: a soup made from blended buttermilk and tuna fish sandwich, a dinner of animal bones, a tub of plastic caviar, a cherub sculpted from lard, a menu offering a dish of bubble gum and raisins, crusty, dirty dishes, leftovers and a dinner party whose guests must watch a video of open-heart surgery while eating. There is very little here to make one hungry, and if there is any pleasure to be gained from eating, it must be earned the hard way. In most cases, in the exhibition, the audience under attack is the privileged class who do not have to think about food in order to eat it. 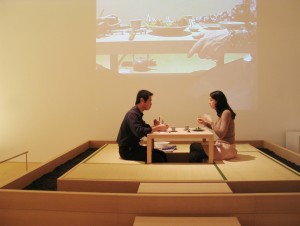 Because “Feast” is essentially a retrospective of performance art, it grapples with the problem of how to best display relics and artifacts of meals finished long ago. For his contribution to the show, Lee Mingwei has set up a Japanese-style dinner table where he will enjoy a meal with three visitors (chosen by lottery) in the museum after-hours. But while the exhibition is open, viewers see the empty table and video documentation of diners. Mingwei, in a video on the museum’s website, says, “The documentation, in a way, pollutes my work and my spirit. It’s a very poor way of sharing with people what the actual thing is.” Were it not for the supplemental dining activities, many of which will take place off-site, the displays in “Feast” would seem distant, inert, and dry.

Many of the artworks are focused on the “conversations” that arise when people are gathered to share a meal. For example, Mella Jaarsma’s customized bibs force diners into close range with one another, and while wearing the bibs, the artist requests that participants feed each other. A video documenting one performance shows the diners having a polite conversation over the meal. We find out which parts of Hyde Park they live in, and so on. The constraining bibs didn’t seem to produce an insightful conversation from the diners, but instead revealed the awkward courtesies of strangers when placed in an uncomfortable situation and filmed for public broadcast.

Elsewhere, an anonymous “conversation” proved to be more candid. In a thematic section about the Asian vegetable bitter melons, viewers can leave anonymous responses to the prompt, “What makes you bitter?” This didn’t seem to be about food at all, but people responded candidly about bullies, relationships and eating disorders. Nearby, in an unrelated participation exercise, viewers could describe their “comfort food” on a Post-It note and stick it to the wall. One person listed bulimia as their personal bitterness, and another wrote mac-n-cheese as comfort food. Beyond the act of feel-good participation, what will be done with this random, raw sampling of audience-generated data?

Eating is one of those activities, like sleeping and sex, that people understand innately. “Feast” intends to complicate and transform the ordinariness of eating to reveal some philosophical possibilities, although it edges on the esoteric. A mixed-media installation from Mildred’s Lane presents kitchen cookery relating to “algorithmic dinners” and “pedagogical experimentation,” reads the wall label. I’m very curious to know more about what an algorithmic dinner is, exactly, but that question goes unanswered in the show. I’m also skeptical about “The act of drinking beer is the highest form of art,” which is Tom Marioni’s installation. Why is it the highest form of art? Isn’t it just a byproduct of art openings? Maybe one must be drunk to find out.

What, then, will be the legacy of this new genre of “radical hospitality”? With leftovers strewn about the galleries, food sealed within display cases, and private bacchanals held off-site, a typical viewer can feel quite left out, even as the buzzwords are “inclusion” and “participation.” Yes, food can be artistic. Yes, food is political. But if you want an artistic meal, go to Moto. And if you’re an artist who wants to make an impact with food, go lobby the FDA or volunteer at a bread line. Don’t just cheer free beer with the 1%.