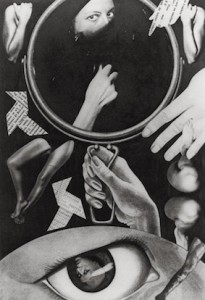 In her polyvocal memoir “Disavowals,” Claude Cahun (1894–1954) characterized herself thusly: “Indiscreet and brutal, I enjoy looking at what’s underneath the crossed-out bits of my soul. Ill-advised intentions have been revised there, become dormant; others have materialized in their place.” Put into the context of her photographic portraits, her words suggest some of what would come to set feminist and queer performance apart from both Modernism’s heroic quest for objective essence and Post-Modernity’s freeform indulgence—a meandering but obsessive attempt to confront oneself primarily through deeds, and only secondarily via images and ideas.

Prefiguring Andy Warhol, Adrian Piper and Cindy Sherman with her iconic scrambling of public identity, Cahun photographed herself in various roles and settings, sometimes in the context of an actual theatrical performance, moving later into anthropomorphic montages and assemblages. The Art Institute is hosting a breathtaking traveling survey of Cahun’s often dense and diminutive photographs, in which she represents interference between female, male and androgynous identities, as in a weightlifter series in which she wears thick makeup with pomaded masculine hair and purses her lips, her faux-skin shirt declaring, in English: “I am in training. Don’t kiss me.”

Using mirrors, masks, and montage to suggest fragmented and multiplied bodies, she illustrated what fellow French feminist Luce Irigaray said of women half a century later: “Her sexuality, always at least double, goes even further: it is plural…the woman has sex organs more or less everywhere.” Expressed in the exhibition title, “Entre Nous,” Cahun’s concern was about community rather than individuality; she became an active member of the resistance to the occupation of France, going so far as to distribute leaflets to Nazi troops and, with her female collaborator and (similarly pseudonymous) lover Marcel Moore, spent some years in prison. Cahun’s subverted archetypes suggest a more literal and more glorious liberation than that generally proposed by Surrealism—as she said, “Realities disguised as symbols are, for me, new realities that are immeasurably preferable. I make an effort to take them at their word.” (Bert Stabler)

Through June 3 at the Art Institute of Chicago, 111 South Michigan.