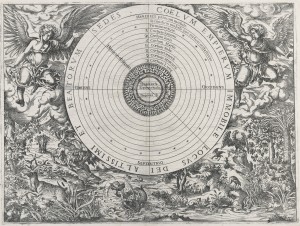 I was captivated by Dürer’s “Melencolia I” as a young person. In those days, the dense, mysterious print was presented as great and unique art, largely isolated from the multiplicity of its sixteenth-century Northern European context. Now, however, anyone who wants to find out about the print will be able to see it surrounded by engravings and woodcuts representing a confluence of scientific and humanistic knowledge, produced and communicated to the world through the burgeoning process of printmaking. The brooding angel takes her place in an era concerned with the measuring, exploring and mapping of the wonders of an expanding universe. Allegorical figures, innumerable putti and Platonic solids share the same space as scientific instruments and objects of empirical observation. Brimming with engravings and woodcuts, several rooms address subjects ranging from public dissections and exotic creatures to maps, paper astrolabes, portable sundials, diagrams and herbals. The collection illustrates not only what the curators call “an especially dynamic matrix for the production of knowledge,” but an instructive expansion of art history and curatorial practice. The exhibition foregrounds the collaborations among engravers, printers, natural scientists, cartographers and surgeons to organize new information about the body, the world and the universe, shaping and, importantly, reproducing the visual parameters of knowledge through the developing medium of printmaking. 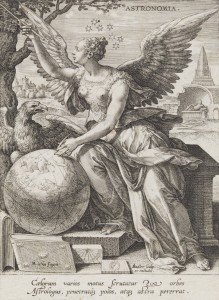 In the sixteenth century, some believed in a Ptolemaic universe while others accepted the ideas of Copernicus—the same muse presided over mathematics and music. People were obsessed with sundials and astrology, fascinated and extremely proud of their crafts and occupations. Anyone who has wondered where history ends and art begins, or questioned any system of classification, will find ample evidence of epistemological flux in the rooms full of prints. It is clear that the modern world is still in the process of formation, and pictorial spaces, objects, diagrams, text and decoration all contribute meaning. The display of the engraver’s art is astonishing on the line where the boundaries of scientific illustration and imagination waver.

A seaside landscape dominated by a beached whale is one of my favorite inclusions in the show. The great sperm whale is surrounded by people from diverse classes, ages and occupations, some measuring the creature or crawling over it, some come to look or simply to be present. Jacob Matham reimagines this scene in 1598, after a drawing by Hendrick Goltzius, as a festive event and an omen. The silent interactions among the Netherlandish crowd, their gestures, clothing and expressions provide engaging theater and a record of the town’s social makeup, framed by the busy geography of the coast. (Janina Ciezadlo)