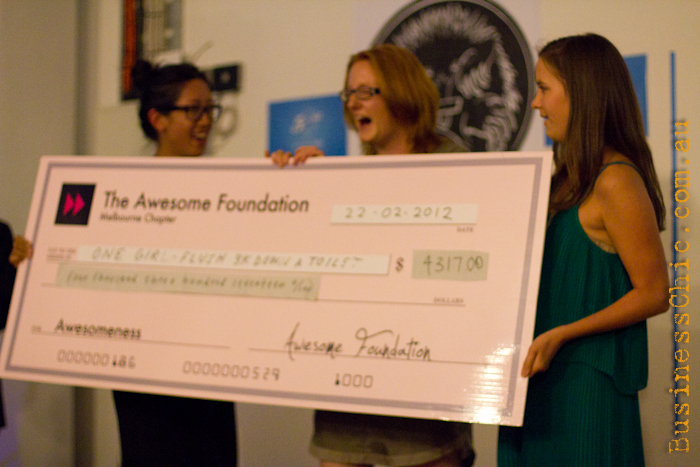 The foundation awards its first "megagrant" at the Melbourne chapter

Chicago is about to get a bit more awesome. The Chicago branch of the Boston-based Awesome Foundation is spreading awesomeness around Chicago with $1,000 microgrants. The goal is to provide no-strings-attached money to forward the interest of awesomeness in the universe. What exactly is awesomeness might be difficult to define, but the Awesome Foundation knows it when it sees it.

“What we really go for is a mix,” says Chris McAvoy, founding member of the Chicago chapter, which has been around nearly a year. “Some of it is fun. Some are art projects. Our only criteria is that it has to be $1,000 and benefit the city in some form.”

There aren’t any hard and fast criteria for something to be considered awesome, and the selection is subjective to the granting jury. Applicants looking to submit a proposal for a grant can simply go to the foundation’s website. A new grant is given about every month and sometimes multiple times per month. In the past year, the Chicago chapter has awarded grants to artists who have helped youths make pinhole cameras to exchange photographs of urban life with counterparts in Brazil; have created birdhouse lending libraries to serve various communities in Chicago; and have developed stickers with QR codes that when scanned will load a video of people reading their favorite poetry.

The concept behind the Awesome Foundation is simple: ten trustees front $100 each and pick a project that will make Chicago more awesome. If it sounds rather loose, that’s because it is. “We are trying to prove to the rest of the city that you can have a positive impact with a relatively small amount of money,” McAvoy says. “We want to show that this kind of stuff is doable without having to wait for funding from large groups.” Current and past trustees for the Chicago Awesome Foundation include an aerial acrobat, a founder of an information technology consultancy, a network engineer, a VP of technology, a chairman of a tech company, a consultant to Chicago’s Olympic bid, a design director for a presidential campaign and a couple of executive creative directors.

Microloans and microgrants have gained traction in recent years with several organizations in Chicago offering small grants and loans for entrepreneurs and small businesses. Because traditional grants can take years to receive and are generally for larger projects, the Awesome Foundation microgrants offer artists a quicker conception to completion time and the foundation with more fluidity to get projects it deems fit off the ground faster. (Jason Kreke)