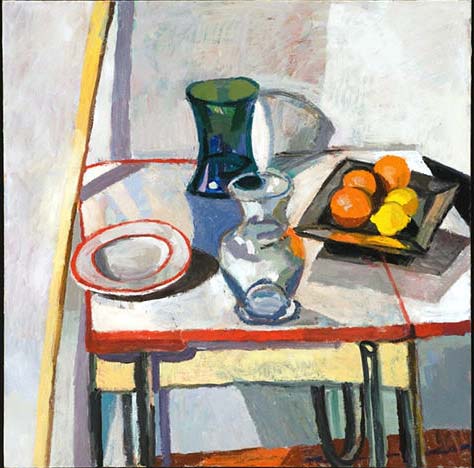 In that eternal tension between past and future (or Alexandrine and avant-garde, as Clement Greenberg once put it), it’s pretty clear where Don Southard has taken his stand. He’s as devoted to early twentieth-century Modernism as any traditional Chinese brush painter has been to the masters of the Sung Dynasty. Just as the ideal scholar-artist of the Far East would retreat to the mountains for a quiet life of aesthetic contemplation, Southard has retreated to his kitchen to paint beautiful still-lifes of tables, plates, bottles and fruit, in the tradition of Cezanne and Matisse. Would that condemn his work as derivative? Only if you couldn’t help wanting a Matisse while looking at Southard, and I don’t. He’s got his own whimsical sense of space and how things hang together, precariously balanced but stately, mildly humorous and overwhelmingly delicious. He really has a sense for things being right, but only barely. Not included in this exhibition are his copies and, yes, he is a serial copyist, even into his fourth decade as a painter. But those copies are more like commentaries than replicas, revealing again that this artist is more like a scholar and less like either a revolutionary or an entrepreneur. But when have artists ever led revolutions, anyway? Like Jacques Louis David, they’re more inclined to loiter at the fringes and wait for career opportunities. Even Robespierre needed some quiet moments, and a good painter of still-life is always demonstrating how to enjoy them, and it doesn’t really matter how much the painting relates to anything else happening in the world. Without an identification label, Southard paintings could just as likely have come from southern France in 1912 as from northern Illinois a hundred years later. Though they clearly differ from the mimetic textures, chiaroscuro, and consequent sense of mortality and profundity of earlier styles of still-life that are also being revived in our era. Southard’s space is as bright, shallow and relentlessly cheerful as an IKEA showroom. Modernism forever! (Chris Miller)

Through March 31, by appointment, at the Union League Club, 65 West Jackson