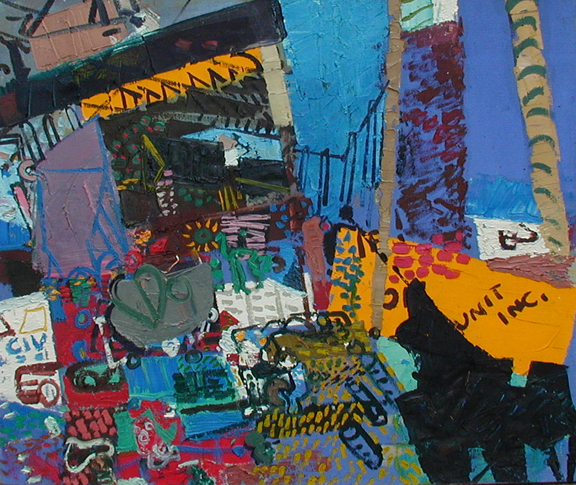 Forty years of teaching at the Kansas City Art Institute gave Lester Goldman (1942-2005) the opportunity as well as incentive to traverse the history of twentieth-century American painting. He started out with a style of figure painting similar to the public and commercial art of earlier decades, just as narrative as the work of his teacher, Leland Bell, but more solemn and statuesque, presenting family values that would have played well in Kansas when he moved there in 1966. In his final decades, all social content was gone, as well as figures, volume and pictorial space, leaving his painting with a kind of flat, monumental, slithering, funky abstraction that reached down to discover the very foundations of human life, i.e., protoplasm, with the mind as a bowl of cosmic soup, containing everything that’s ever entered it, in no particular order as it floats to the surface.

But whether this transformation is to be celebrated as liberation or deplored as degeneration, it was his transitional decade, the eighties, that produced his most exciting and appealing work, with a kind of jazzy, hyperactive vision of our chaotic, dynamic, modern world. This is the period that Kamp Gallery has chosen to bring to Winnetka, and its upbeat liveliness contrasts quite well with the more sedate, earlier styles of painting in which that gallery specializes.

He may have broken free from well-defined pictorial imagery, but his designs still feel like interior or exterior views, as his paint-loaded brush happily celebrated a typically over-stimulated urban life in commerce-driven middle America, with an over-indulgence presented not with irony or criticism, but with the discipline of a high art form. As the artist once said in an interview, “All the work in the painting is to get the painting to feel like it was done all at once, and to make the form simple and intricate at the same time.”  That’s exactly what he did so well. (Chris Miller)