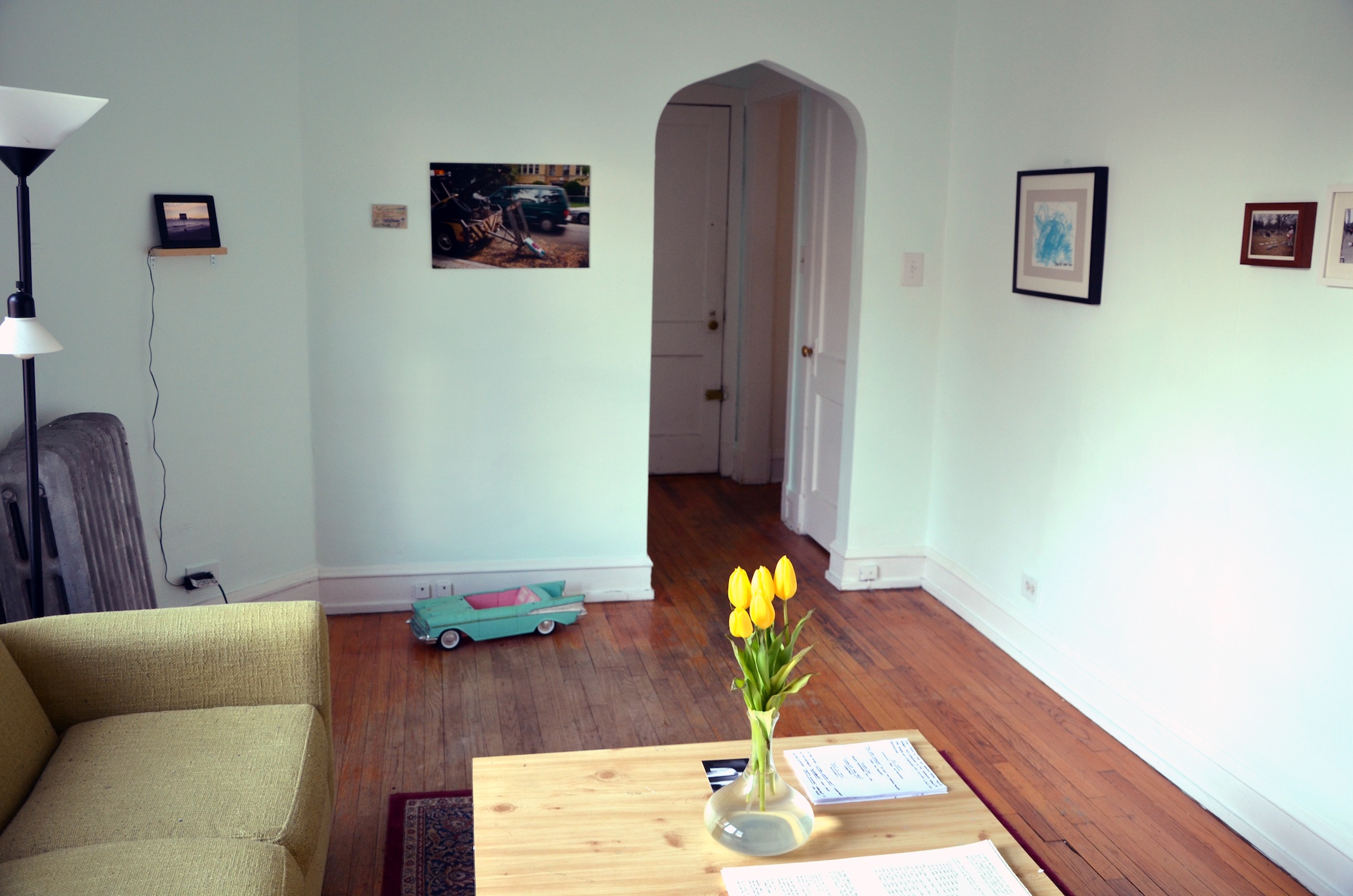 Works by Oli Watt and Ben Bellas fill the sparse living room at Kirk’s Apartment, their objects mirroring one another on opposite sides of the room. The show, titled “THAT THING IN THAT OLD GROUCHO MARX MOVIE WHERE HE’S STANDING IN THE DOORWAY OPPOSITE THE OTHER GUY STANDING AND ACTING LIKE HIS REFLECTION,” refers to the Marx Brothers’ mirror gag from the 1933 film “Duck Soup.” In it, Groucho confronts his apparent mirror image—or is it the other way around? —as the likeness comes increasingly into question.

“It’s appropriate because along with appreciating the emotional tone of their work, it’s really funny,” Kirk Faber, the show’s curator, says. “There’s a simplicity that has a punch line or a get, so to frame a show around a get, or the punch line of that mirror gag, and have it expand from there was the impetus. It’s about seeing yourself, or not, in another person by accident.”

The “get” is palpable and subtly conjures the satisfaction felt in the execution of a good joke. This is particularly true of the dialogue between two beach scenes in video; Watt’s at sunrise accompanied by a sign by Gabriel Fowler, and Bellas’ at sunset. The videos’ audio is indistinguishable, linking the works across content and airwaves, at once opposite and decidedly interconnected. Both artists, professors at SAIC, deal in everyday objects—Watt’s photo of a Barbie car attached to a full-sized tow truck—to play the meaning in their materials.

An American Girl Place bag sits on the floor, evidence of a performance in which Bellas, donning a dark suit, spent the entire day at the store, in the guise that he was meeting a nonexistent daughter. The professionally attired liar roamed for hours, even enjoying tea with his doll in the ballroom, and waiting in line amongst throngs of little girls to have his photo taken for a personalized magazine. Doll in hand, lies abound, Bellas alleviated the alarming quality that a darkly clad adult man might otherwise generate. The ungifted shopping bag suggests the flimsy nature of authority, both that of the store’s over its clientele, and Bellas’ with his empowering prop.

The newest work in the exhibition is a collaboration between the artists, a broadside screen-printed by Watt with Bellas’ poem-length titles, suggesting that even the exhibition itself is a work of art. The prints are free to gallery visitors for the duration of the show. (Claire Glass)