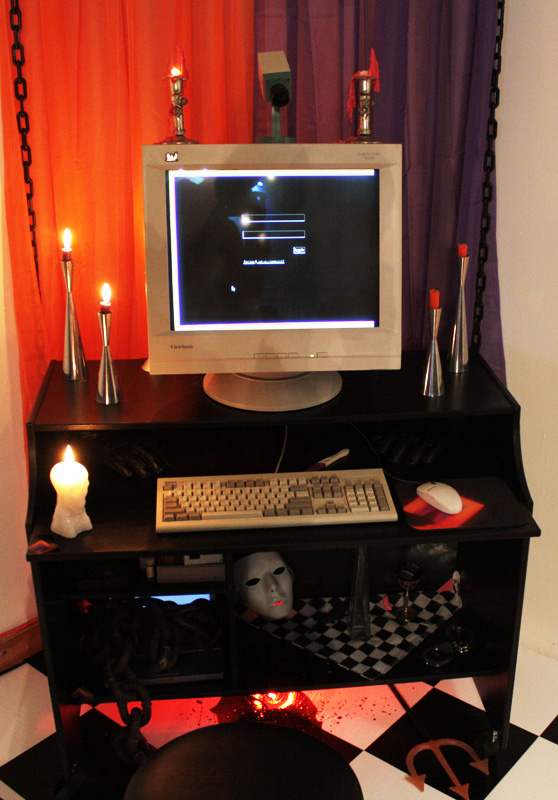 On the wall near the entrance of the apartment-turned-gallery Antena, the phrase “Evil Is Interesting” is written in bold black letters. It’s as much the name of the show as it is a declaration: evil is all around us, and as much as we want to ignore it, it’s inside of us as well. The exhibition shows that evil can be proactive. It also shows that evil can be a bit fun, campy and cheesy.

The space is transformed into an entire theater, complete with works of art and theatrical performances. Not satisfied to have a blank gallery space with white walls, the entire apartment area becomes transformed, with video projections, interactive installations and artworks hanging from the ceiling. By providing the domestic as a backdrop, the space demonstrates how evil can manifest itself not only in the outside world but also in the areas that are built to keep it out.

The dozen or so works from a basketball team’s worth of artists lean heavily toward video art and coalesce around a central theme: evil. Instead of external representations of evil (don’t expect Satanic pentagrams or portraits of Bundy), the show demonstrates how people internalize and manifest evil.

There is nothing particularly evil about the show. Instead, it attempts to interrogate “the seductiveness and glamour of evil,” writes the show’s curator, Michael Workman, but there is a disconnect between what the space attempts to show—insouciant brutality and eroticized violence—and what it actually pulls off. Where the show does hit its stride is illustrating how evil is an intimate choice with the “goal of manipulating its victims into rejecting their own self-worth and…giving away control over the direction of their own life-course,” beautifully illustrated in everything from a video of Google searches to a video piece where an internalized dialogue of doubt and loathing scrolls underneath the image of a young woman. With themes of betrayal, suicide and narcissism, the show allows the viewer to ask how we deal with evil in ourselves and in society. (Jason Kreke)