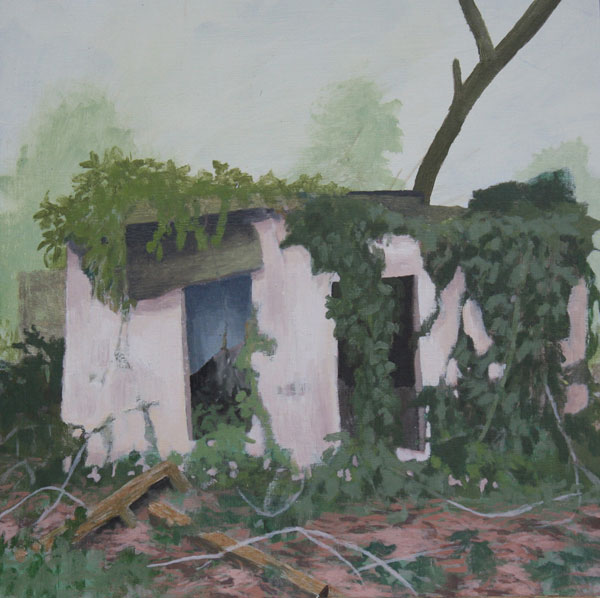 Home is a haven as well as the site of our most complex and painful personal struggles—alternatively the setting of warm nights by the fire and domestic disputes. Joseph Noderer’s densely filled paintings address the duality of home in his third solo exhibition at Linda Warren Projects, titled “Ain’t No Reason to Hang My Head.” Based outside of Austin, Texas, but influenced by time spent in the lush environs of South Carolina, the artist depicts the exteriors of single-story residences surrounded and often encroached by their wild, green surroundings.

Frontal compositions, such as “Downfall of the Bolm Road Cement Factory” and “Pink Motel” recall documentation of fiscal and environmental disaster, such as Zoe Strauss’ shuttered Philadelphia buildings and images of the aftermath of Hurricane Katrina. Noderer’s concerns are, however, more interpersonal than socioeconomic. 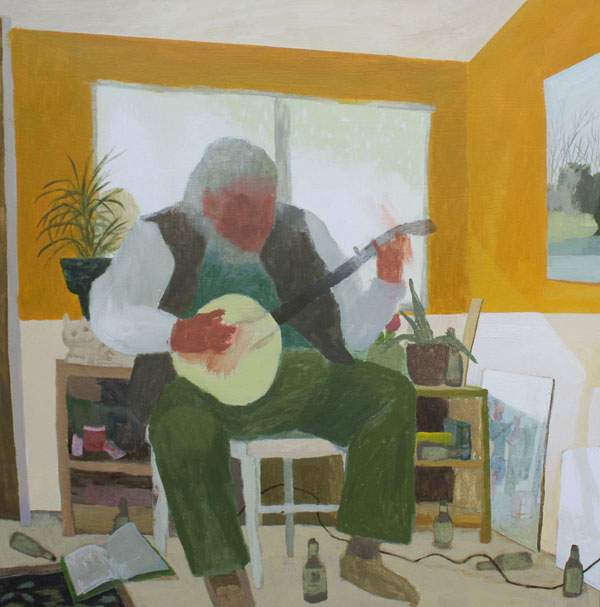 Noderer related to me a failed love story that inspired a self-portrait, of sorts, in “Croslin Street Rag.” Beer bottles strewn on the floor of his former apartment, loosely rendered in acrylic paint on wood panel, indicate the immoderation that follows heartbreak in conjunction with the imposing figure of amateur musician Pat Conte imagined into the center of the room by Noderer. To him, Conte embodies the excess of this dark time. He slips a painting of himself, positioned like Conte with banjo in lap, into the room’s corner to make the parallel clear.

Engaging with a number of histories at once—family, individual, community, folk­­­­—Noderer’s painterly canvases present views both familiar and tempestuous. His muted color tones remain consistent while his sentiments range from pastoral tranquility to wild chaos, creating a sophisticated body of work. (Lee Colon)