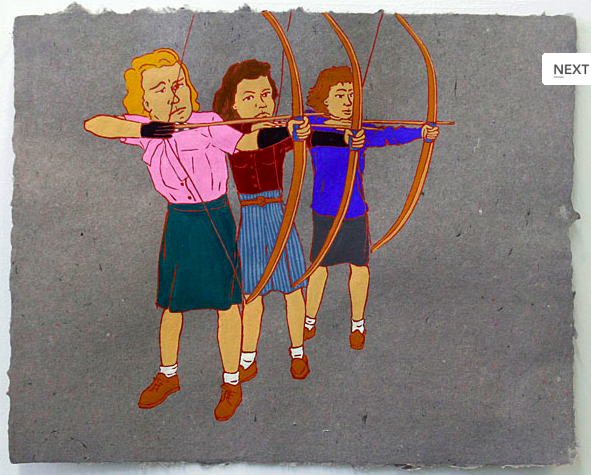 Nancy Mladenoff’s exhibition, “The Ladies,” provides an antidote to the discouraging anti-birth control and abortion disquisitions and the other disconcerting fundamentalist fantasies in the news, like the appalling female submission movement. Mladenoff’s collection of twenty-six portraits of woman mentors reminds us that before there was a woman’s movement and a general cultural push toward emancipation and equality, there were always women who went their own way and acted autonomously in the world.

My favorite work in Mladenoff’s collection shows a woman in the munitions factory standing in front of a funny phallic pile of ordinance. I was also charmed by a lovely portrait of the outlaw Jennie Metcalf in a fluffy blue dress and a beribboned hat, holding a gun. In the past, Mladenoff, who grew up in the wilds of Wisconsin, has concentrated on natural history, so many women who have worked in the sciences have migrated to the latest collection, including entomologist Ann Haven Morgan and herpetologist Doris Mable Cochran, among others. 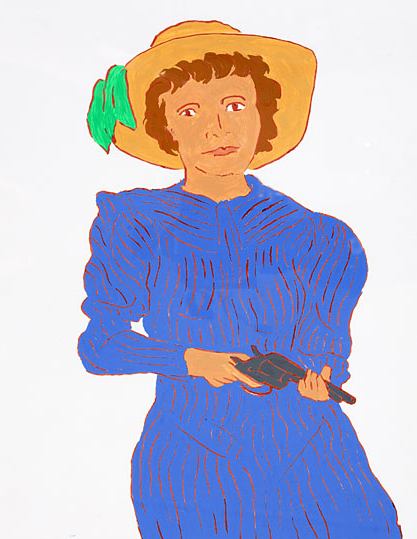 Mladenoff paints in a simple, flat, descriptive style. Using watercolors, gouache and Flashe (an opaque, matte tempera-like paint), she constructs a gallery of figures that seem almost like saints’ portraits or represented figures in an encyclopedia. Each woman is discreet (even those in groups or pairs) and importantly depicted with unique attributes: the herpetologist with a frog, tennis players with rackets and lady hunters with guns. During the long march of Western culture, women in art were rarely presented as active subjects and were often relegated to the position of passive object to the male gaze. Mladenoff mounts a counter claim against that tradition, but the timing is up for discussion. Are these paintings of women who express their identity through action belated or is feminine individuality and singularity still at stake? (Janina Ciezadlo)