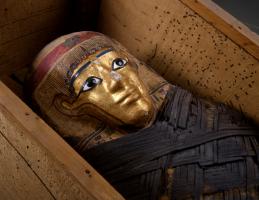 With its strong commitment to family entertainment, the Field Museum can hardly present cultural material as if it were an art museum. However, if you pick carefully through its current special exhibitions, you may find some worthwhile and even beautiful things, as I did in its “Opening the Vaults” exhibition of Egyptian and South American mummies. The focus of this show are CT-scans of corpses, and unfortunately, there is no historical context into which any of the material can be firmly placed, since it was all bought on the open market in 1893. Still, the cartoonish images on the three painted coffins are often whimsical and sometimes elegant, especially that of Lady Em-Hotep, which bears a strong resemblance to the twentieth-century Art Deco style that borrowed so heavily from ancient sources.

The exhibition focused on Genghis Khan is far more extensive, ambitious, and entertaining for children of all ages. It’s chock full of video, photographs and audio. None of the artists are identified, and most of the scene painting is subpar, but there is an exciting wall-sized image of the Mongolian fleet being destroyed by a storm off the coast of Japan. Typical for an exhibit aimed at twelve-year-olds, this episode is treated as a sound bite, and the fuller story of the protracted siege is not mentioned. A fascinating collection of objects made at Karakorum, the imperial city constructed to house the multinational skilled workers who served the ruling class, offers more detail. Whatever else might be said about these international marauders, they did have good taste in ceramic bowls and Buddhist paraphernalia. There are a few real treasures here from the Mongolian national museum, including a page from the precious sutra, Sanduin Jud, boasting solid gold calligraphy of the eight-thousand verses. 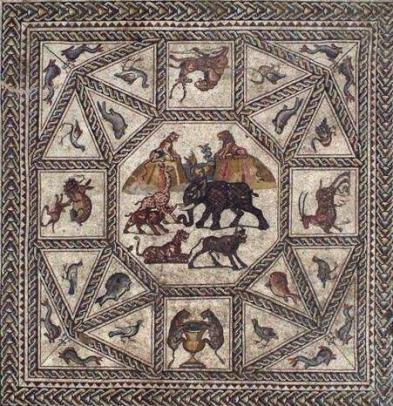 Best of all is a three-hundred-square-foot Roman mosaic floor, recently unearthed in Israel, and on the last leg of its American tour before permanent installation back in Lod, Israel. It’s made with two million cut stones, whose colors, happily, have not changed over time. The overall design seems to have been cut-and-pasted from an animal picture book, much like the interactive play-station that accompanies this exhibit. Close-up, the stonework of individual fish, birds and other beasts is captivating.

Mention should also be made of the museum’s Brooker Gallery, since it is the only art gallery in the Chicago area dedicated to the accurate observation of nature and culture. Currently, it is showing the world’s largest coffee-table book. Imagine a National Geographic magazine the size of a king-size bed, with digital photographs printed in full, high-resolution color. It’s unforgettable. (Chris Miller)

Opening the Vaults shows through April 22, Genghis Khan through September 3, and Roman Mosaic from Lod through April 22 at the Field Museum, 1400 South Lake Shore Drive.