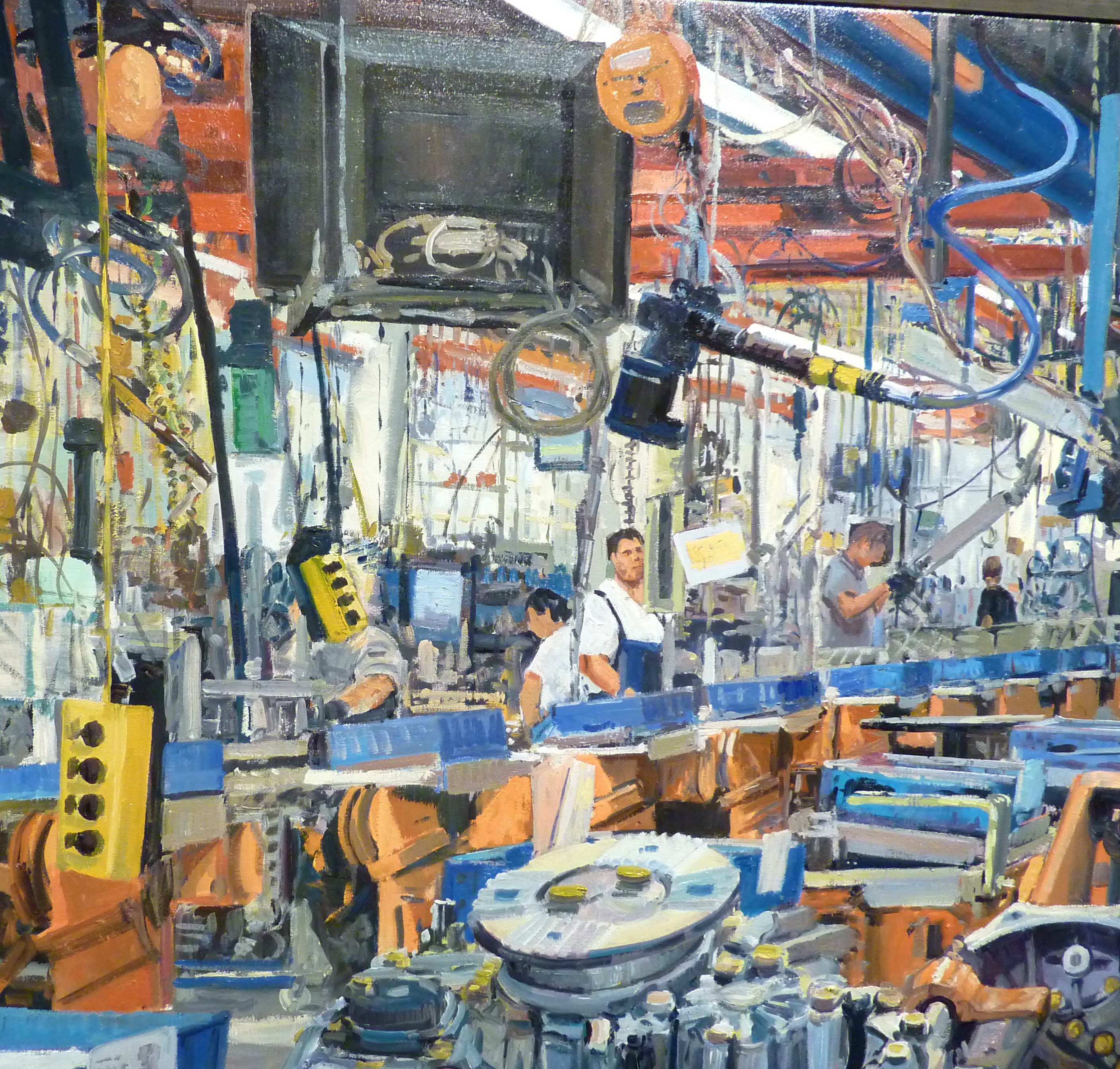 German painter H.D. Tylle proclaimed, “I am attempting to reach two levels: people who are involved in art but don’t know about working circumstances, and people working in factories who are normally not involved in art.” Tylle gets commissioned by industrialists, like Eckhart Grohmann, who know something about both, and it’s a tribute to both the artist and his patrons that his work is far greater than the industrial photography or illustration often found in trade magazines. He excels both in small, quick studies done on the factory floor and in heroic-sized visions, completed back at the studio. Remarkably enough, they’re neither heroic nor romantic, like the historic twentieth and nineteenth-century factory paintings in the “Man at Work” collection, on display at the Grohmann Museum. His quick sketches have the ambience of an authentic workplace, lacking only the smell and noise, while his studio pieces are a kind of psychedelic meditation on the dynamic chaos of life within a mechanical organism made up of a maze of color-coded tubes and wires. The artist is proud that, up close, his images dissolve into abstract forms, but you don’t need to get that close. As you follow the last ten years of his career, beginning in this show with a gallery of commissions depicting Grohmann’s aluminum-auto-parts foundry in Milwaukee, he has continued to become a more sensitive, adept and exciting painter. He takes full advantage of the bizarre spatial effects produced by the monumental fabrication of commercial aircraft or cross-country pipelines, while up close his paint-loaded brush executes a quick and cheerful calligraphy. He does simple, effective portraits of the workers, not as heroes, victims, or automatons, but as individuals in their own private worlds as they attend to the high-tech workplace that envelops them.

The scale and irrationality of the architectural interiors resemble Giovanni Battista Piranesi’s Carceri, eighteenth-century drawings of imaginary prisons. As enjoyable as these paintings are, they do not depict places I would like to stay or jobs I would like to do, and the apparent absence of ideology is itself an ideology. These are factories as their owners and managers like to see them. (Chris Miller)

Through April 22 at the Grohmann Museum, 1000 North Broadway, Milwaukee, Wisconsin