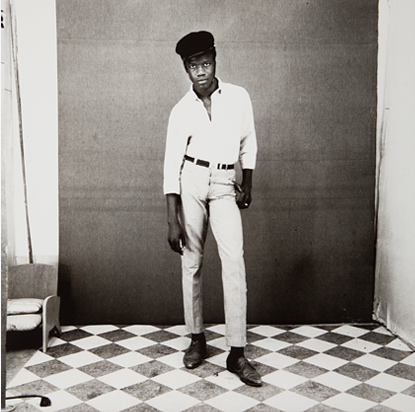 Recently, the landlocked West-African country of Mali has been wracked by a military coup and ethnic unrest, but, in the 1960s, Mali was experiencing a burst of energy and optimism that attended its liberation from French colonialism. Enter Malick Sidibe, who set up his storefront photography studio in the capital, Bamako, and proceeded to shoot the exuberant nightlife of the times and take portraits of its devotees—young people who embraced global popular culture and melded it with traditional chic. A celebrant of the high life and an astute businessman, Sidibe hit upon the idea of giving his subjects “the image of a real star,” showing off their prized possessions, their favorite outfits, and their cool, macho or seductive attitudes. We see three tough guys, prominently sporting their watches, standing in a row behind their boombox, exuding the essence of stoic cool. Youth culture had come to Mali and Sidibe kicked it up to the stratosphere of visual romance. (Michael Weinstein)

Through June 3 at the DePaul Art Musuem, 935 West Fullerton