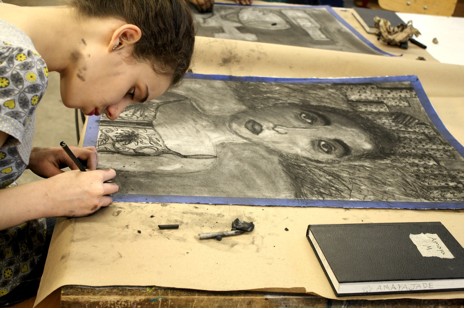 A student makes art in the course, “Eye to Hand: Drawing Foundations” during Marwen’s Winter Term 2012. Photo: Courtesy of Marwen.

Two important Chicago arts organizations, Marwen, in River North, and the National Museum of Mexican Art, in Pilsen, are celebrating their twenty-fifth anniversaries this year. The institutions are tied by their 1987 inception and by their missions to bring arts education to underserved communities.

Marwen provides free art courses and college and career services to students in grades six through twelve at no cost. Founded by Steve Berkowitz, the program has grown from a handful of students to 600-800 students per year coming from fifty-five of Chicago’s fifty-seven zip codes, and is supported by an almost completely privately funded operating budget of $2.5 million.

Berkowitz recognized the necessity for students to understand how to apply learned art skills after graduation, and Marwen expanded its offerings to college and career counseling in addition to its art instruction. Today, four of Marwen’s seventeen passionate staff members specialize in one-on-one counseling, workshops for families, college planning, home economics and résumé-building workshops, and other services that prepare students for adult careers.

Marwen’s focus on career preparation and graduation counseling effects long-term changes in its students’ lives instead of just occupying them after school. Ninety-one percent of Marwen students are accepted to four-year universities—an astounding accomplishment considering only fifty-five percent of Chicago Public School graduates pursue further education. Staff is quick to credit the dedication of students, who invest their evenings commuting to and participating in two-and-a-half-hour classes after a full day at school. Most importantly, the college-acceptance rate is an affirmation of the organization’s philosophy—that any driven student, given the right tools and support, can achieve great things.

Marwen staff view the landmark twenty-fifth anniversary as an opportunity to reflect on the school’s history as well as market its program. A series of videos will capture the stories of board members, staff, teaching artists, alumni and others involved, to raise awareness of its impact in Chicago. The occasion also benefits from involvement of alumni, many of whom are practicing artists, arts administrators and even Marwen Teaching Artists. Despite the organization’s undeniable developmental success and extraordinary growth, executive director Antonia Contro confesses that the most rewarding aspect of her job has simply been seeing former students out in the world as successful art professionals. 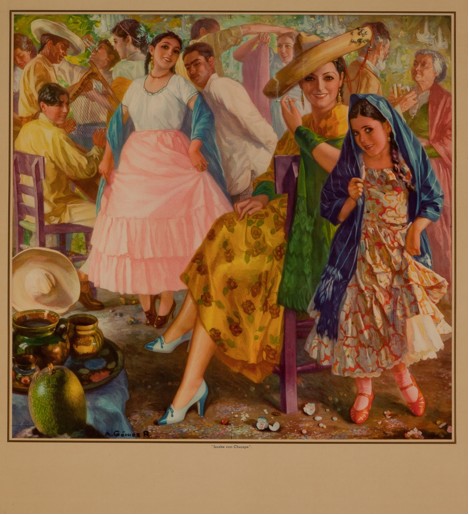 Like Marwen, the National Museum of Mexican Art (NMMA) provides access to arts education for underserved communities. The museum is always free of charge, welcomes visitors with galleries painted in bright, warm colors, and offers an impressive collection of vibrant, accessible works, both classic and modern. To celebrate twenty-five years since its founding, a Sunday afternoon “birthday party” seemed appropriate. Complete with balloons, food, singing, dancing and art activities, the March 25 festivities involved English and Spanish-speaking staff and gleeful children darting about between concerts and arts-and-crafts stations. The museum has managed to eschew exclusivity while becoming the first and only accredited museum of Latino art and one of the largest collections of Mexican Art in the US.

The inclusive approach stems from NMMA’s founder and director Carlos Tortolero. In his early days as a schoolteacher, Tortolero became exasperated with the public education system. He identified a problematic ignorance of Mexico’s art and culture within Chicago’s Hispanic youth, and opened the Mexican Fine Arts Center Museum in 1987 (the name later changed). Today, the museum dedicates one-third of its operating budget to education and hosts over 1,100 school visits per year. Tortolero likes to say, “there is inside the box and outside the box. We just throw away the box,” referring to the museum’s independent spirit.

To celebrate the Silver Anniversary, the museum is showcasing its 7,000-piece collection, which permanent-collection-curator Rebecca Meyers has grown from a mere 100 works. For the first time in the museum’s history, the museum’s collection occupies all galleries, with three special exhibitions organized by museum staff: “El Alma de la Fiesta,” which displays fine and folk art representing Mexican and Mexican-American celebrations (through August 19); “Keepers,” a refreshingly translucent presentation of the institution’s operations, and recent museum acquisitions (through October 21); and “Mardonio Magaña: Circa 1938,” which includes the largest US collection of wooden sculptures of Magaña, a self-taught artist championed by Diego Rivera and Frida Kahlo (throughSeptember 23). Several special events will also be held throughout the year.