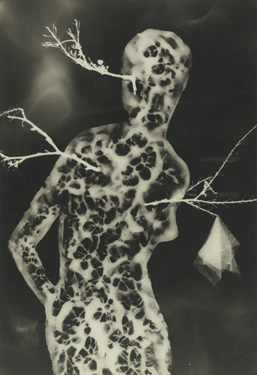 This first museum retrospective brings together seventy works that Jindrich Heisler (1914–1953) made between 1938, when he joined the Czechoslovakia Surrealist Group, and his death, in 1953. Disobeying a summons to deportation to a concentration camp in 1941, Heisler remained in hiding until the war’s end. Undeterred by the suppression of surrealism in Nazi-occupied Czechoslovakia, Heisler made much of the work in the exhibition while in hiding.

In a series of photographs from 1944-1945 titled “From the Same Ilk (De la meme farine),” the moth-eaten bodies of figures form inverted silhouettes against black backdrops. Stretched into being across stark landscapes, cobwebby striations connect hand to hand, hand to face. The hues and rough textures recall Alberto Giacometti’s painted bronze sculptures. Heisler achieved these existentially wrought images through an inventive process of drawing, possibly with petroleum jelly on a glass photo plate or through image transfers, then printing the results on photosensitive paper, often applying color by hand.

For his most compelling works, photomontages made in 1943-1944, Heisler staged metaphysically charged objects, such as dolls and bones, with photographs as backdrops into witty, surreal scenes he photographed. Objects take on presence. A human pelvis topped with the winding crown of a watch floats like an angel of death above a circle of jagged rocks reminiscent of Neolithic stone circles. In an uncanny juxtaposition like those made by Belgian surrealist René Magritte, a hat topped with a castle becomes a mountain. In a nod to the Marquis de Sade, who was a favored inspiration to surrealists, a work titled “Philosophy of the Boudoir” shows a gilded frame that cages a woman, her face wrapped in chains.

Collaborating with his artistic companion Toyen (Marie Cermínová) on “From the Strongholds of Sleep” (and several books published from 1939–1940), Heisler commingled poetry and “object-landscapes” for the photographs that make up the book. After moving to Paris with Toyen in 1947, Heisler hooked up with the surrealist group of André Breton and spearheaded a new venture into text and image: the first postwar surrealist journal, called “Néon.” Heisler’s three-dimensions assemblages from the 1950s, made for friends including Breton, give material presence to text. These book-objects, framed boxes containing objects in rows like lines of text, repeat imagery as if they are rhymes in a poem. Heisler used his final work, a celebrated wood-carved alphabet collaged with hands, wheels, staircases, wings and other symbols, to tell stories to friends by rearranging the letters of their names. Through semiotic and dimensional play, Heisler arrived at new formal possibilities, and worlds. (Dana Boutin)

Through July 1 at the Art Institute of Chicago, 111 South Michigan