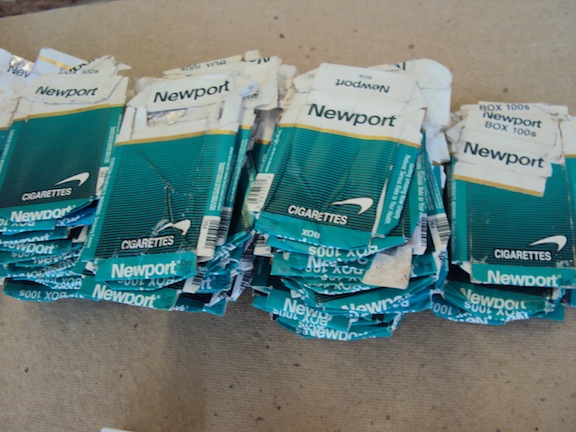 Unless you’re acquainted with urban legends around cigarettes, you (like me) may not have known that the standard Marlboro pack allegedly contains several Ku Klux Klan references. Tipped to the side, the colored chevron resembles a “K”—and the box has three such designs. The tips of the “l” and the “b,” with the rest of the word “Marlboro” covered up, look like the eyes of a hooded Klansman. The negative space around the Philip Morris coat-of-arms logo looks as if two Klansmen are carrying the banner, and the logo “Marlboro” upside down can be read as “Orobl” (horrible) “Jew.”

Such conspiracy trivia may or may not be explicitly in evidence in Paul Erschen’s upcoming show at The Hills Esthetic Center, but it forms the conceptual foundation for his work around scavenged cigarette boxes—primarily Newports (and off-brand and counterfeit Newports) rather than Marlboros, thus the show title: “Newport Room.” Much of Erschen’s work comes from his environment—the cigarette-box collection came about as a side activity when he was collecting discarded plastic drug bags. He also will be presenting small wooden models inspired by specific but anonymous West Side facades. Non sequiturs intervene, like the small industrial-organic forms placed throughout, cast in plaster from unrecognizable detritus and faux-painted in muted tones. There will be photocopied and screenprinted images culled from his cigarette research and presented bereft of context, and surprising color elements added to the architectural dioramas.

Erschen aims to find content outside of art history, but his tools within it. “I employ fairly conventional techniques to ideas that exist outside of art,” he told me. In discussing Mayor Daley,  the clanging, dirgey punk band he co-founded in 2002, Erschen suggested that, as with British Invasion interpretations of American R&B, culture grows not through genuflections to authenticity, but by the fortuitous failures of attempts to reconcile traditions with social and technological conditions. His Newport project is informed by his reading of “Block By Block,” Amanda Seligman’s historical study of Chicago’s West Side,  in which she reviews the details of brutal postwar apartheid politics. In his studio, Erschen has a map spread out showing the neighborhoods that were cleared to make room for West Side expressways, and he summarized a Seligman anecdote in which white Garfield Park residents offered to give their entire park to UIC, in return for the increased property values that they hoped would keep blacks out of the area.

What it would seem Erschen is trying to do is to harness the aura of physical undeniability that founds both the authority of the market and the museum and, as have artists since Duchamp’s urinal fountain, to simultaneously question and celebrate that authority. But what manifests in his work is not merely authority, easily dismissed when bracketed with self-awareness, but a subject usually associated with political work, that of privilege. As with the irregular figures and sparse hooks that chop Mayor Daley’s music into discrete chunks, Erschen’s artwork operates through feelings of dissociation. Rather than merely presenting blight as a dismal echo of aesthetic ennui or moral disgust, the combination of effects he produces will hopefully chip away at the wall that preserves the security and sensitivity of the viewer. (Bert Stabler)