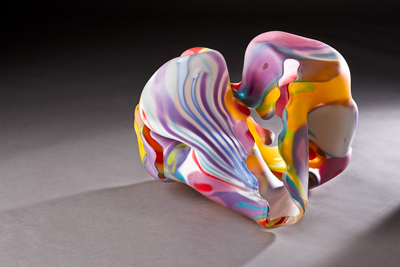 In 1962, Harvey Littleton, a ceramic instructor at the University of Wisconsin, and Dominick Labino, a visionary industrial engineer, collaborated to assemble a glass-blowing workshop at the Toledo Museum of Art, training students like Dale Chihuly and Marvin Lipofsky, and thus beginning the American Studio Glass Movement. To mark its fiftieth anniversary, the Krannert Museum has assembled thirty-six pieces representing both its origins and diversity of practice.

That diversity is more than a little mind-boggling. Like the creative people who made them, these pieces are defiantly individualistic, and every kind of glass technique seems to have been included: casting, laminating, blowing, enameling, etching and others. A wide variety of artistic discourse is present as well, from classical figuration to abstract expression, folk art, ethnic art and modern decorative design.

As Harvey Littleton once said: “It’s always nice to have a reputation as an innovator, but in the long run, your work has to stand on its own as a unique and fine piece of art.” With so many flamboyant pieces crammed into such a small space, it’s not easy to give each object the attention it deserves, but it is certainly worth the effort.

Overall, the most successful pieces seem to be those that play to the medium’s greatest strengths: color and translucency, while keeping the shapes simple and compact. This seems to have been the strategy of the pioneers mentioned above. More recent practitioners, like David Huchthausen and Jose Chardiet, have cranked up the level of formal complexity, making their work more eye catching but less satisfying, while others, like Howard Ben Tre and Preston Singletary, have gone for more solid, timeless sculptural qualities that are still best achieved by other media like stone, clay or metal.

Joel Philip Myers is perhaps the most fascinating artist included as his self-expression has moved through a variety of formal combinations over the past four decades, while Nicolas Africano stands out as a refugee from another art world. Unlike all the others, he’s not craft-oriented at all, noting that “I don’t really know much about glass” and “I don’t like to see what happens in the rooms where things are cast.” Instead, he’s a classical sculptor, modeling evocative small nude figures whose lonely wistfulness is deliciously enhanced by the way that light seeps into their glass surfaces. For more than a hundred years, the difference between fine artists and decorative artists has been highly disputed. If one were still willing to make that distinction, these two artists would have to be called the former. (Chris Miller)