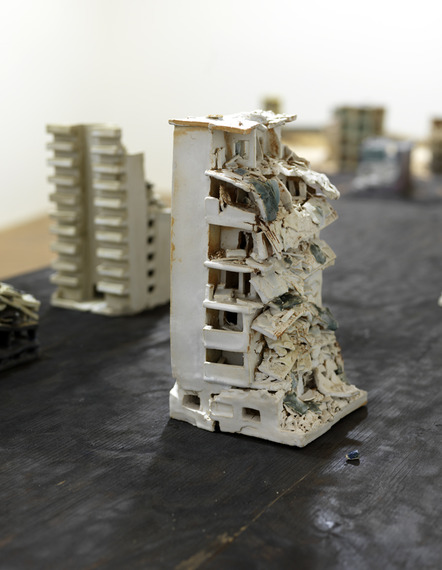 “Natural Disaster,” currently on view at Adds Donna, is a new collection of ceramic sculptures by Alison Ruttan from an ongoing project titled “A Bad Idea Seems Good Again.” Her sunken ceramic architectural maquettes are based on photographic evidence of sites of conflict across the Middle East, East Africa and Southeast Asia, miniaturizing scenes of manmade destruction. Diverse in style of depicted demolition—from partially collapsed midrise to debris-ridden car-bomb site—the maquette ruins occupy a tabletop terrain of charred plywood situated at the center of the exhibition space.

Ruttan uses photographic documentation from turbulent metropolitan areas (most frequently Beirut, Gaza and Baghdad) to construct and demolish each structure by hand, reenacting—on a less abrasive, personal scale—the process that yielded the aftermath she is citing. This positions “Natural Disaster” neatly alongside a previous project by Ruttan, “The Four Year War at Gombe,” informed by Jane Goodall’s investigation into strategic societal conflict among chimpanzees that produced a haunting echo of wars historically waged by humans. For the project, Ruttan reenacted and re-photographed, with human subjects, the conflicts documented by Goodall. 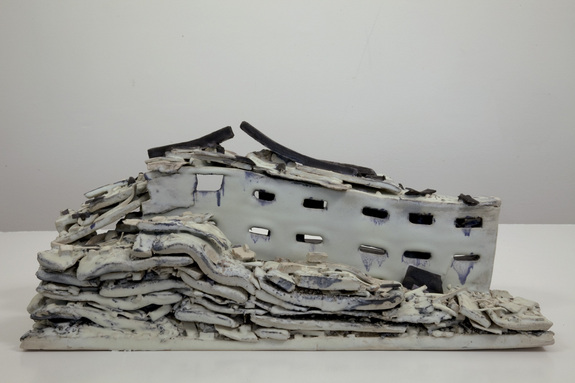 Ruttan’s most recent project is neither commemorative nor overtly critical of the political discourse surrounding the conflicts she cites. Instead, “Natural Disaster” explores a lofty question of human nature: do we have a natural inclination for conflict? In this way, “Natural Disaster” is an effective extension of Ruttan’s past work. It is also an exhibition made accessible in its delivery—a miniaturized staging of global conflicts, themselves intimidating in scale. (Pat Elifritz)