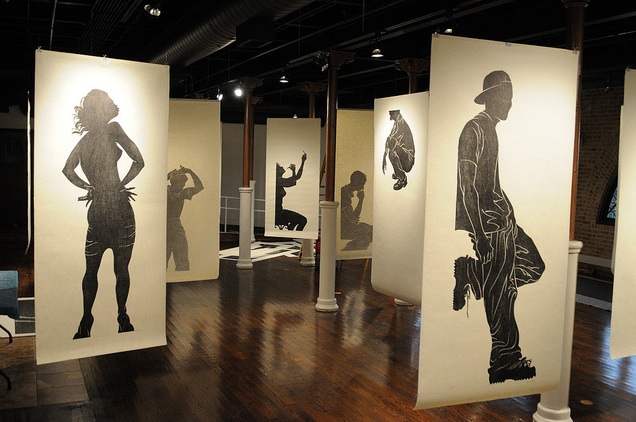 When art museums, universities or other American cultural institutions need someone to represent Puerto Rican culture, Antonio Martorell is a go-to guy, with appearances sponsored by the Smithsonian, the NYC Department of Cultural Affairs and recently at Harvard and Northwestern. Martorell is like a cultural ambassador, more concerned with building a cultural identity than exploring a personal vision. In his current year-long installation in Chicago, he transforms a gallery at the Institute of Puerto Rican Arts and Culture into something of a community center with life-sized woodblock prints of community members, young and old. The old folks might be walking a dog or getting a haircut; the young people might be chatting on a cell phone or adjusting an earring.

All of them are, literally, just hanging out, as the prints are suspended from the ceiling rather than set against the walls. The figures are made especially humorous and engaging through Martorell’s ability to capture gestures with simplicity and grace. They might be doing the witless things that people usually do when they gather together, but the sharp mind of the artist is everywhere evident, even on the floor, where he has supervised community volunteers in the creation of a paper on canvas installation. Presumably, those who participated and/or were represented have all enjoyed the experience of re-connecting to their vibrant Caribbean culture. Though, with a minimal presence in commercial galleries and auctions, it remains a question if Martorell’s prints will have a second life among collectors.

The prints exemplify the tradition of Puerto Rican realism as introduced by Ramon Frade (Martorell is the director of the Frade Museum at the University of Puerto Rico) and poster art as practiced by Rafael Tufiño Figueroa and Lorenzo Homar (Martorell once worked in his studio). Like good advertising art, Martorell’s designs are strong enough to attract attention to the idea of ethnic identity, but they do not sustain long or repeated visual contemplation. Nevertheless, the self-involved characters bring the work beyond feel-good fluff. None of them are paying attention to anyone but themselves in their portrayed public setting (one is even picking his nose). Portrayed in stark silhouette, the young people seem especially superficial, while the old people, portrayed in an atmospheric haze, seem to be fading back into the wood grain of the four-by-eight-foot plywood panels that have been used to make the prints, and next might be repurposed to build their coffins. (Chris Miller)

Through June 8 at the Institute of Puerto Rican Arts and Culture, 3015 West Division