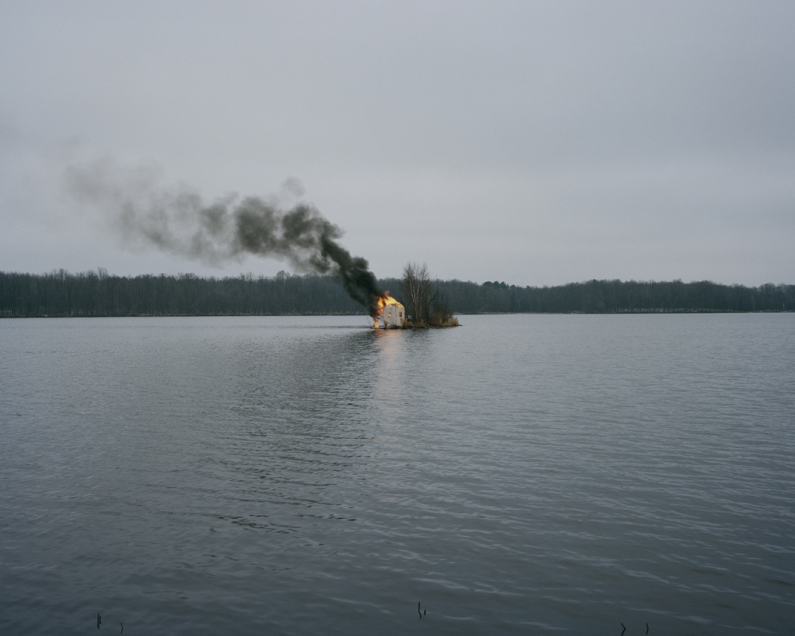 Each of the fifteen large-scale photographs in Carrie Schneider’s “Burning House” series has at its center a house ablaze. Schneider creates images at once idyllic and unsettling, conjuring domesticity and its destruction. Shot on an isolated lake in north-central Wisconsin, to which Schneider made numerous trips from her Brooklyn home, the compositions are approximately bisected by horizon lines, creating an overall sense of balance in the series—a balance disrupted by changes in season and atmosphere, and by the luminous blaze that haunts each photo. In some, the smoke rises in gorgeous billows against a sun-saturated sky; in others, it is windblown, cutting across the surface of the image. The effect is consistently uncanny. Freud defined the uncanny as the product of repression, by which the familiar, domestic, and “homely” becomes unfamiliar and fearful—a “harbinger of death.” Schneider’s series investigates aesthetic modes of the uncanny to spectacular effect.

In one sense, “Burning House” is an extension of Schneider’s previous work, which, in good Chicago fashion, taps into the surrealist uncanny. This is explicit in her 2008 photograph “Kiss”—a re-creation, with living subjects, of Magritte’s painted “Lovers,” in which veils conceal and separate the faces of a lip-locked couple—an image of vexed, and thus heightened, desire. In the present series, the uncanniness derives in part from what André Breton termed the “fixed-explosive”; Schneider’s blazing houses are visions of arrested dynamism. But the photos are also traces of a repeated process of construction and destruction. In this regard, Schneider situates her work in response to the non-monuments of Robert Smithson, who claimed that entropy—the second law of thermodynamics—is the repressed element of architecture. Schneider has remarked that her project began as an attempt to undermine this law. And yet, the conceptual interest of these photos emerges through the simultaneous evocation and suspension of entropic movement—and as with “Kiss,” there is pleasure in this contradiction. Schneider returns the repressed by enacting and arresting it; her houses, diminutive but intensely lit-up, are icons of their own undoing, non-monuments of the homely made harbingers of a liberating death. Fixed and explosive, these images possess all the allure of the uncanny at the intersection of entropy and eternity. (Jeremy Biles)

Through May 12 at Monique Meloche Gallery, 2154 West Division