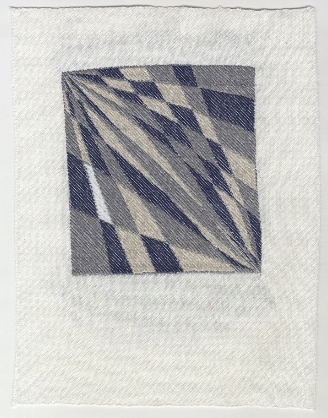 In my childhood of the late 1970s and the early 1980s, the prevalence of graphic woven tapestries in domestic environments evoked slight fascination and fear, much like the glowing grids that marked the vast open virtual spaces in the film “Tron”—total order, without center or edge. This intuition was not baseless—as Hannah Higgins writes in “The Grid Book,” “The most important invention for the industrialization of the textile trade” was the Jacquard loom, which operates using punch cards, like the first computers, and “not only creates a gridded product, but takes the form of a grid itself.”

Like the weavers of the German Bauhaus, Christy Matson, for her work now on display at Alderman Exhibitions, made use of this automated loom in the creation of asymmetrical and colorful geometric compositions. Matson also used software that converted her scanned drawings (also on display at the gallery) into instructions for the loom, but, unlike contemporary artists like Renee So who rely completely on automated fiber fabrication, Matson then intervened by hand in the actual operation of the shuttle, so that the final results suggest the organic variations of the original drawings, eschewing the perfection of the grid in order to present meandering lines, idiosyncratic highlights, frayed edges, rippled surfaces and non-identical forms that contrast with the pixelated field of the cloth.

With the help of her palette, subdued and lysergic by turns, the weavings also channel some of the materiality of 1970s handicraft; one of these pieces could conceivably be hung adjoining a plant in a beaded macramé sling, and, given a sufficiently expressive macramé artist, the combination could work. Even more psychedelic, if less formally convincing, is “OK See,” her video collaboration with Ken Fandell, in which the original drawings for the weavings are part of a strobing loop that also includes footage of cute turtles filmed in El Salvador. The video does serve to demonstrate, however, that the grid of the loom (which, Higgins suggests, echoes the grid of integrated networks) has a degree of nuance that may never be achieved by the truly flat grid of the screen. (Bert Stabler)