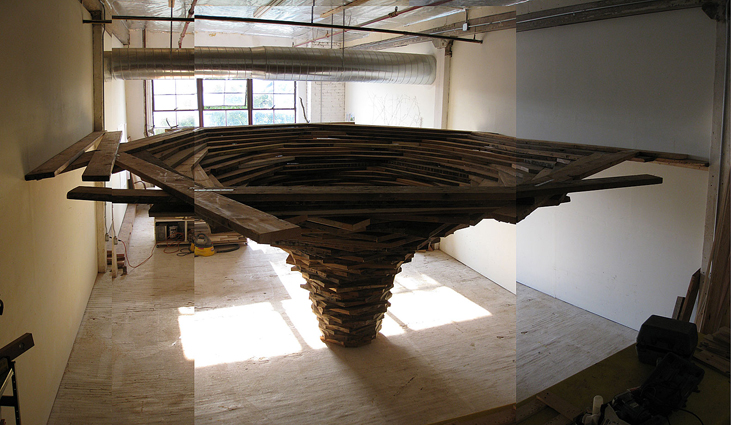 In her twenty-plus-year career, A. Laurie Palmer has positioned natural materials—salt, sand, wood, cooked cabbage—in unusual environments in order to question their so-called natural abundance. Coming out of her research project titled “Eating the Earth,” Palmer exhibits “Hole,” a seven-foot high funnel composed of reused wood planks. The uncomfortably large “Hole,” which fills Threewalls Gallery like an imposing Richard Serra sculpture, represents, for Palmer, an open mine—those gaping holes dug into the earth to provide us with materials for so many modern conveniences.

The wood planks that compose “Hole” are built up concentrically to give the impression of a tornado. It touches the walls, and viewers must navigate around it carefully to understand its true scale, recalling the large dead tree that Material Exchange stuffed into Threewalls’ former gallery space in 2008. Palmer, though, makes something that feels unnatural, despite her natural materials, and this is to the benefit of her project. Viewers can be hoisted up to the hole’s lip in a chair-and-pulley in order to look inside the hole and to complete its namesake. This flight delivers a sense of relief from the crushing storm below, although it is not without a newfound sense of danger as one hovers high up in the chair.

Holes and voids have been used successfully in contemporary art as entryways into the sublime (see Michael Heizer or Urs Fischer), and mining pits have been dramatically documented by Edward Burtynsky. Palmer’s “Hole” provides something akin to a model, a proto-hole, even though the holes she mourns have already been dug, with more inevitably on the way.

A second artwork, “794 mph,” evokes the speeding motion of “Hole” only in its title. It is actually an excruciatingly slow-paced video, which documents the gradual shift from night to morning in a landscaped yard. “794 mph” seems to develop at the pace of grass growing. Where “Hole” delivers the instant pleasure of scale, “794 mph” purposefully tests the patience of viewers, and adds another dimension to feelings of discomfort. Both artworks challenge viewers to question the cost of their comforts. (Jason Kreke)