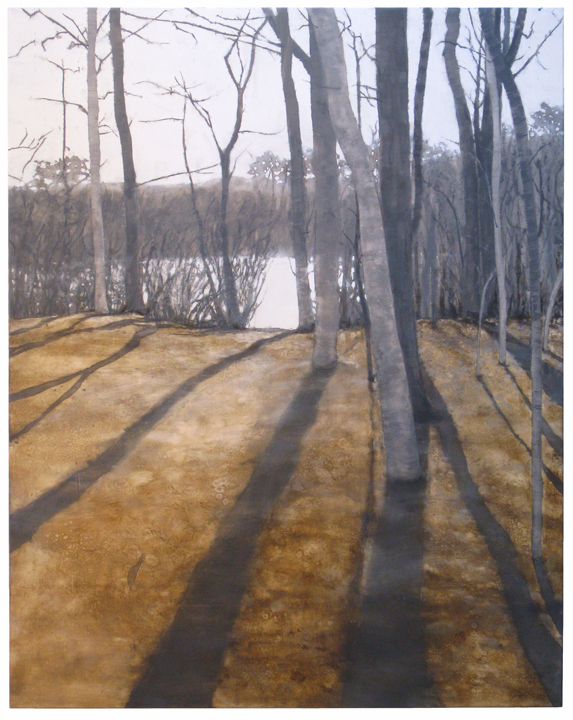 Dystopian as our culture may be, the urban world remains a highly ordered and sometimes beautiful environment, as Daniel Bodner discovered after he stopped painting painful, alienated, distorted images of a solitary, standing human figure, looked out at the streets of New York, and painted a series of charming cityscapes. Even more beautiful are the easy-flowing natural forms of the countryside, similar to those of his native Wisconsin, which have recently taken him in a new direction. The resulting landscapes are now the latest chapter in his career at Roy Boyd Gallery, where he remains the one and only representational artist. The gallery has a few of the painful nudes from eight years ago still on display, but mostly the walls are now covered with enjoyable landscapes—or, at least, almost enjoyable. These are not the kind of scenes that hospitals use to cheer up patients. The ragged shadows cast by the trees are a little too long, reminding us that day has either just begun or is almost over, and like a cemetery, the scruffy land appears too cultivated to be wild, but too rough to be a garden. Often the sun, which invariably the viewer is facing, obliterates vision, and the green is a little too intense, as if the groggy viewer has just awoken, stumbling into the blinding light. These landscapes are more about the viewer than what’s being viewed. Like most paintings based on photographs, and coincidentally similar to J.M.W. Turner, the scenes seem to have begun with light rather than with the natural form it reveals. And he has carefully heightened that effect, making it feel as if light, rather than a paint-loaded brush, were responsible for his images by burning itself into his canvas, and every mark that interrupts it has been made with painstaking care, building up to a strong composition that hums with tension. Many kinds of landscape painting are regularly shown in the Chicago area, but even in all that variety, Bodner’s solitary, uncomfortable visions stand out as remarkably different. (Chris Miller)

Through May 29 at Roy Boyd Gallery, 739 North Wells