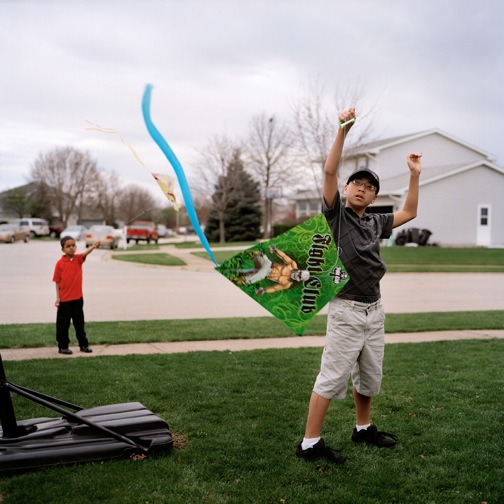 Hailing from one of the many kinds of unconventional families that have sprung up lately in the U.S., Chicago photographer Matt Avignone has turned his camera on his white American adoptive parents (he is Korean and from India) and his four siblings. Between formal and ambient portraits, Avignone’s color images neither dignify nor play with his subjects, but just let them be, which makes them the normal people they are, whether they are flying kites on the front lawn of their modest suburban house, lolling in an inflatable pool, or pushing a cartful of groceries from Aldi. Coupled with Shelby Lee Adams’ Appalachian families depicted downstairs at Edelman Gallery, Avignone’s show teaches the lesson that stereotypes need to be scrapped when it comes to this American life, though not as Ira Glass would have it because people surprise us; just the opposite, because they add their particular inflections to a common everyday life. (Michael Weinstein)

Through May 24 at David Weinberg Photography, 300 West Superior