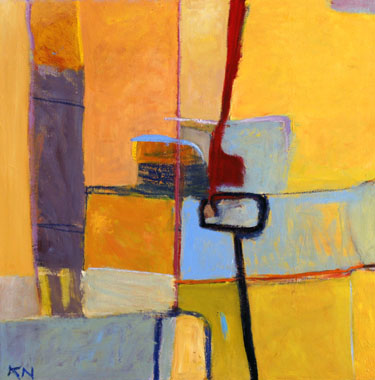 With light pouring in from the glass wall overlooking the Chicago River, the cold, impersonal, reflective surface of the cavernous lobby at 300 South Riverside Plaza is a heroic challenge for Ab-Ex painting, and the work of Japanese-American Keiko Nemeth almost rises to that occasion. Some of the pieces of her recent “Terra” series resemble the “Ocean Park” paintings of her hero Richard Diebenkorn, feeling like the spacious landscapes that the series title suggests. But her tough, striving and sensual self is mostly what’s on display here, as it twists, stretches, tears, cuts and nearly obliterates the grid-like pattern that seems to restrain her. With its influence on Impressionism and still growing presence in our local museums and galleries, Japanese art has long had a major impact on Chicago. Keiko is a bit farther removed from its aesthetic than Miyoko Ito and Michiko Itatani, two other Japanese artists who relocated here. Her painting seems to have become more American, with a greater emphasis on the striving self than on the quiet, transcendent mysteries of the universe. Keiko’s paintings feel like busy construction sites, with piles of materials continually in motion, in the process of being assembled. And there are usually some marks that seem to indicate the last places her brush touched the canvas, like the dramatic concluding flourish of a romantic symphony. As Richard Diebenkorn once said: “I don’t go into the studio with the idea of ‘saying’ something. What I do is face the blank canvas and put a few arbitrary marks on it that start me on some sort of dialogue.” Or, as Keiko, puts it: “My art explores the content, texture and resonance of space that enfolds us and which reflects who we are in return.” So this exhibition does show us the lively world of Keiko, but the luscious relationships that make self-expression worth sharing and adulating have ultimately eluded her designs. Striving is good, but achieving is better. (Chris Miller)

Through July 11 at 300 South Riverside Plaza