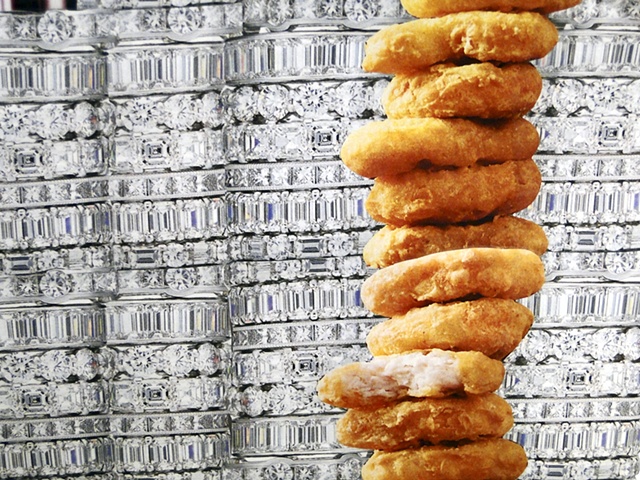 We are given time but it should be hard won. That is the reigning philosophy of artists who fill time with traces of their existence, with towering piles of process-laden materials. When an artist accumulates time and produces a labor-rich object, that object can be sent out into the world to do the work of time—a proxy self who, if it can stand up, succeeds in not just measuring and filling one’s time but extending it.

A standard wall clock is placed in Stacia Yeapanis’ solo exhibition as a reminder that art spaces, like failed time machines, are not time-exempt. Time is an insistent collaborator in “Over and Over Again,” Yeapanis’ showing of eight durational sculptures, collages and videos from a recent studio residency. The studio is certainly one place where time is dense, and Yeapanis treats it like a sculptural material, and questioningly, for she positions food and entertainment distractions into stacked columns, swirled patterns, loops and grids, evincing the emptiness that can come from so much accumulation. If ritual is supposed to give meaning to life, it is obsession that wears it down. Yeapanis inhabits this void to see if it can be a positive, productive space. Loneliness is a major theme here, manifest not only in the solo clock (an imperfect lover?) but also excellently in a pop-TV montage in the style of Christian Marclay. Titled “Solace Supercut,” dozens of fictional characters repeat the sobering phrase, “You don’t have to go through this alone,” and it is looped so that the lone warrior’s quest of self is eventually revealed to be absurd, even clichéd. Yeapanis toys with re-arranging familiar objects to transcend their sad banality—she stacks McNuggets into a “Stairway to Heaven”—confessing the fun of self-transformation burnout. 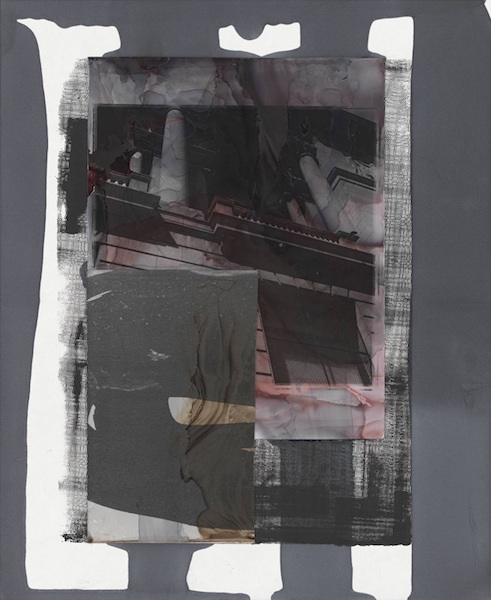 I feel as if I could stare at Arturo Herrera’s new paper collages until they or I decay. Will they outlast me? At least they are poised to conquer something, as the artist has three simultaneous showings of these works, pumped out from his Berlin studio, in London, New York and Chicago, presented in large groups even if they seem to be discrete works. Herrera must have giant piles of the studio discards, old stencils, found papers and printed images that he uses to create the look of his highly composed decompositions. His compact, all-over arrangements thrive like a compost heap, emanating heat from a secret core. The series titled “Chicago” already seems to be in a state of ferment as familiar bits of local architecture are cast in shadow beneath layers of dark gray paint. The other series are vivid and graphic and strong, a parade of studio junk reconfigured to perform their duty as art, but how many generations of golem offspring does it take to finally degrade a lineage? At what point does self-cannibalization cease to renew the body (of work)? Not now, not yet. 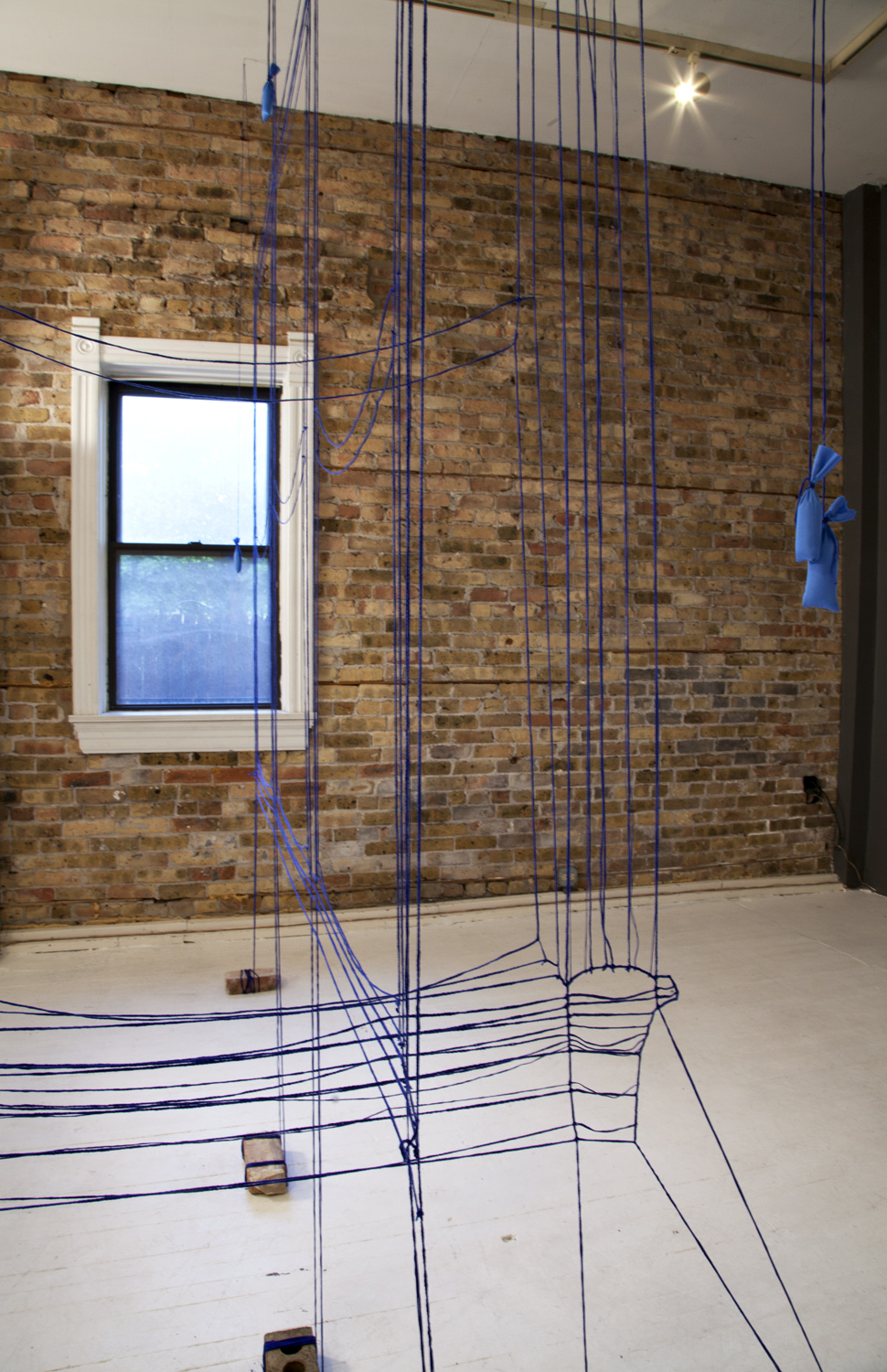 Whereas Herrera and Yeapanis pull time from contemporary subjects and materials, Olivia Valentine pulls the past up into the present. Valentine’s methods are somewhat conventional even as they are deconstructionist. She weaves mock-architectural spaces, such as windows and walls, using lace-making techniques. The results are stunning, and Valentine is the type of artist you want to see succeed in every future endeavor because she has that special skill to revive the fabric of our reality. In the Happy Collaborationists exhibition space, Valentine replicated two adjacent walls in blue hand-laced thread as line drawings, moved them to the middle of the room and hung them so that they intersected in a cruciform. The walls are held by a system of hanging sandbags, a strategy inspired by Gaudi, who diagrammed his own unique architecture with hanging string, upside down. Valentine’s site-specific work mines the local histories of skilled craft traditions, from textiles to architecture, in order to advance them, just slightly, in our consciousness. She has rightly been awarded a Fulbright travel grant to research the indigenous textile patterns of Turkish cave dwellers. Valentine’s work reminds us that the past is at hand, ready to nourish the present. Indeed, we are time-bound, not timeless, but perhaps there is nothing better than art to fix the fatal error of a boring life.

Stacia Yeapanis shows at the Chicago Artists’ Coalition, 217 North Carpenter, through May 31. Arturo Herrera shows at Corbett vs. Dempsey, 1120 North Ashland, through June 23. Olivia Valentine shows at the Happy Collaborationists, 1254 North Noble, through May 27.