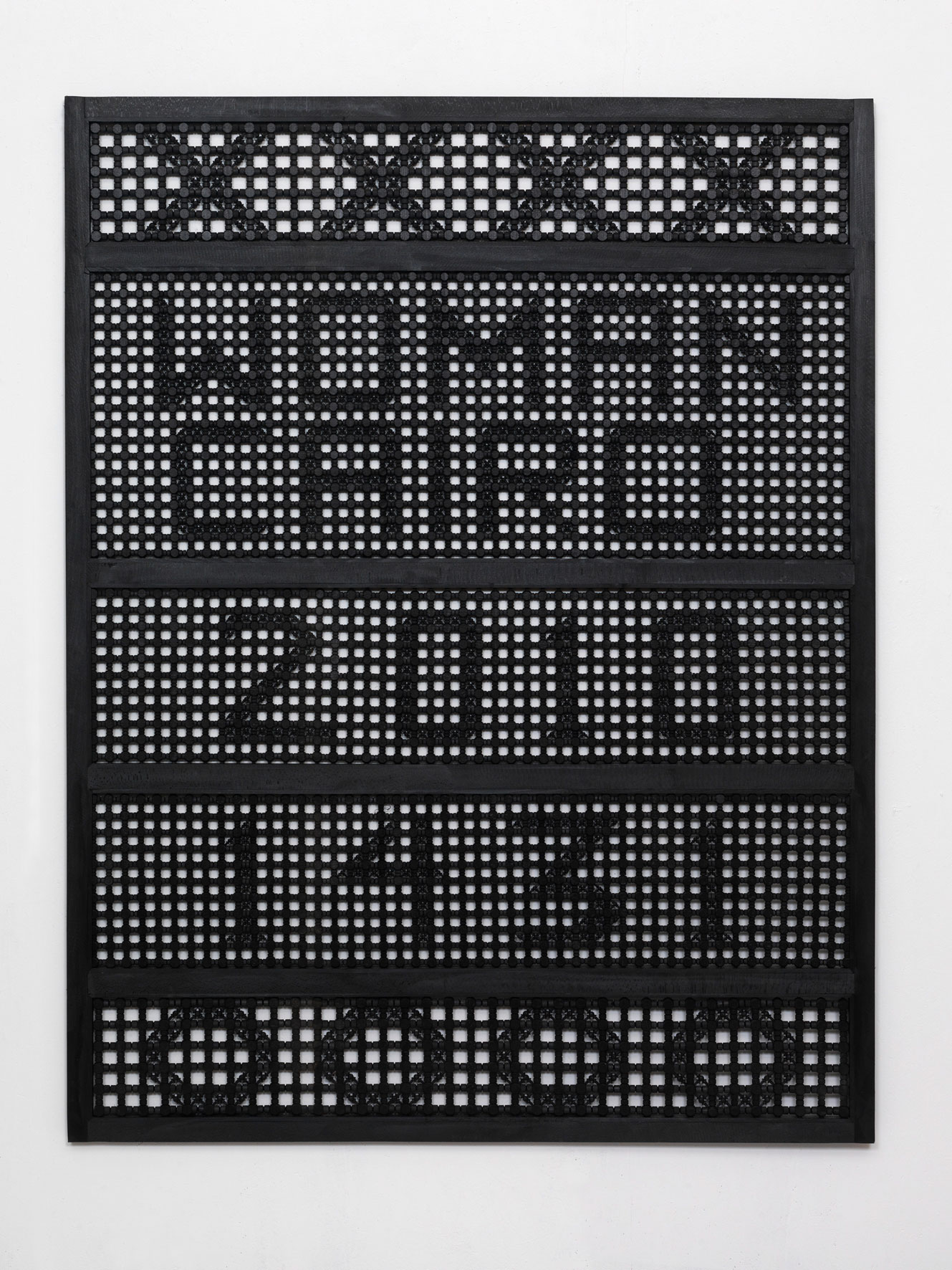 Throughout Egypt, domestic structures are traditionally constructed of brick, stone or adobe, typically between two and five stories in height with projecting oriel windows. Referred to as Mashrabiya, the street-facing bay windows are commonly enclosed in an ornamental screen of wooden latticework. The primary function of a Mashrabiya screen is privacy—the dense crisscrossed pattern preventing any vantage point from the exterior. A number of displaced Mashrabiya screens can be found in Susan Hefuna’s current exhibition, meticulously assembled by the German-Egyptian artist and painted with black ink. However, the latticework of Hefuna’s Mashrabiya screens is not merely ornamental, as messages such as “WOMAN CAIRO” and “CONFESSION” appear within the wooden pattern as the viewer recedes from the structures. Legible only when viewed from a distance, the words position their reader just outside of the private space the Mashrabiya would presumably enclose.

Working in Cairo, Dusseldorf and New York, Hefuna’s exhibition is an account of a truly international artist, thematizing global mobility and the constant negotiation of collective and individual identity it yields. As Hefuna’s Mashrabiya screens speak to a tension between public and private space, a series of quasi-architectural drawings illustrate perpetual motion and fleeting locality. Executed by Hefuna with one uninterrupted mark of black ink on layered translucent paper, the drawings were previously exhibited at the 53rd Venice Biennale. In addition, Hefuna has exhibited at biennials in Sydney, Riwaq, Sharjah, Bulgaria and Prague, presumably accustomed to the rapidity, mobility and visibility of the international biennial circuit. In the past, this network of disparate cultural-geographical sites has been illustrated by Okwui Enwezor as a constellation—a motif inconspicuously present in a number of Hefuna’s textile works. There are consistent and sobering tensions throughout Hefuna’s first Chicago exhibition that echo something much larger—tensions between mobility and locality, between visibility and introspection, between collectivity and individuality, between public decorum and privacy. (Pat Elifritz)