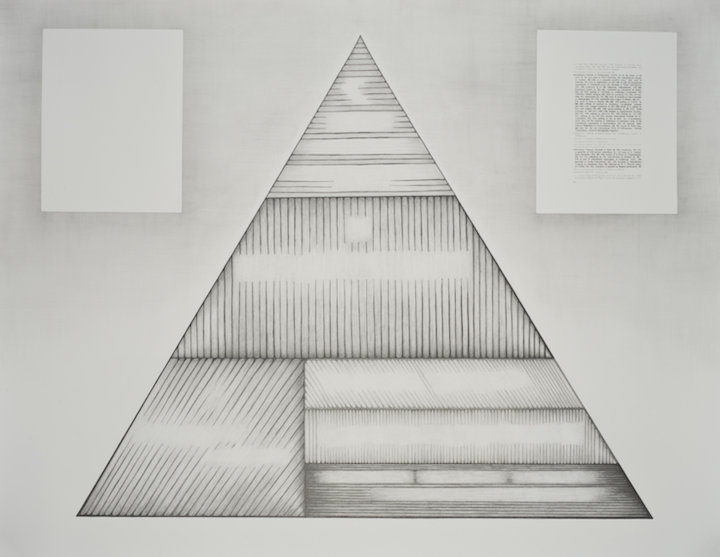 Molly Springfield, from “The Proto-History of the Internet”

If there was an awkward reveal during “Publication in the Expanded Field,” Triple Canopy’s presentation this past March (as part of Columbia College’s Interdisciplinary Arts Department visiting artist program) of their Internet art magazine, it didn’t come via their slogan, “Slowing down the Internet,” nor in their ability to convince writers and artists to transform their materials into purely digital terms, such as a downloadable program that randomly casts shadows across your desktop, nor in their conviction that technology is finally satisfying both the archival impulse and the creative drive. No, the eye-opening moment arrived as an aside during the Q&A: Triple Canopy, the art magazine on the cutting edge of the digital divide, confessed the hope to one day anthologize its online magazine into a printed book. It’s too expensive to keep up with ever-evolving technology, said their web developer, so a book would be permanent, a safeguard against the dematerialization of electronic content. This reversal, this coveting of the physical, ink-and-paper format by a new media group, turns the crisis of the publishing industry on its head. We have experienced the future of the published page, and it is inadequate.

If Triple Canopy were a book, it might read like “Blast Counterblast,” a newly published collection of artists’ writings and short fiction from the WhiteWalls imprint, edited by Anthony Elms and Steve Reinke. Both Triple Canopy and “Blast Counterblast” envision an ideal reader who wants to be educated, inspired and surprised, all at once—and they push readers through exciting interfaces and design enhancements. Triple Canopy presents text as a multimedia experience, and the essays in “Blast Counterblast” have words heightened with colored ink, like suggestions for hyperlinks that the reader must connect. These modifications are subtle, respecting the fact that content should ensnare readers too. 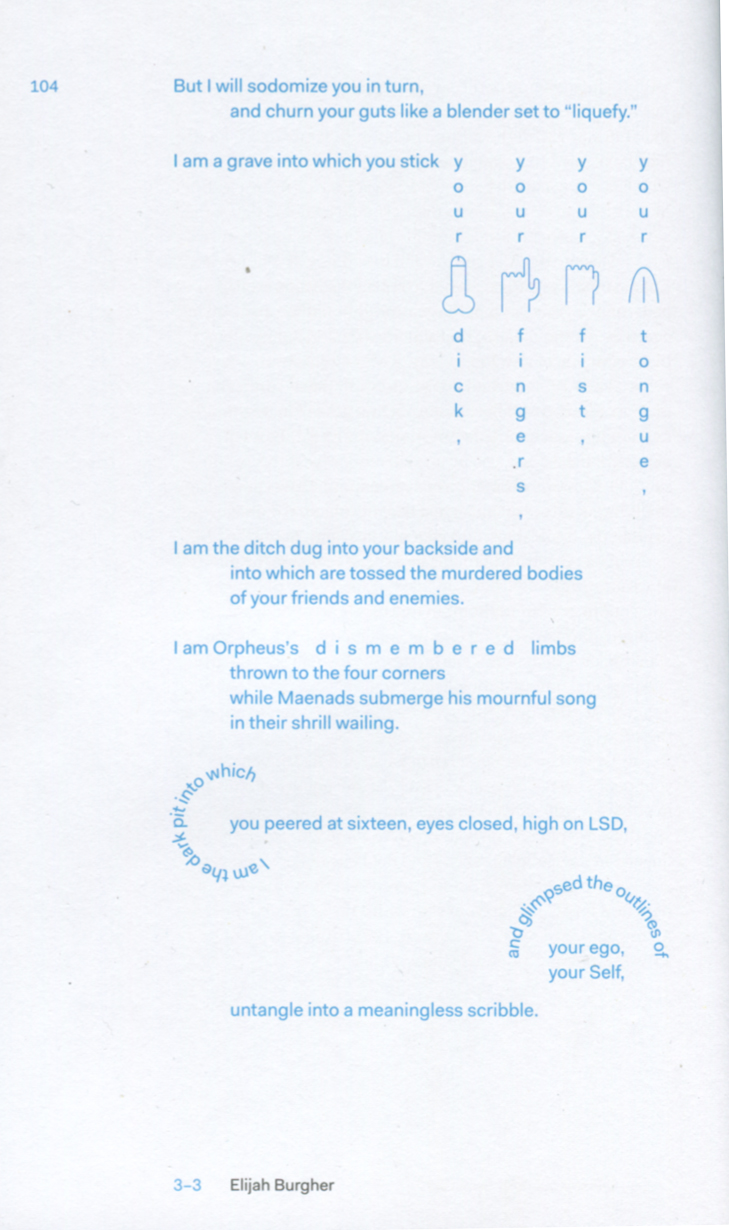 “Blast Counterblast” was conceived to synthesize Wyndham Lewis’ 1914 publication “Blast” and Marshall McLuhan’s 1969 response, “Counterblast.” Both of those texts use expressive typography to carry the weight of provocative messages. “Blast Counterblast,” with bombastic fonts from a Ryan Trecartin script and evocative calligrammes illustrating Elijah Burgher’s personal history of sexual awakening, is pleasantly unpredictable and meaty. At first read, the book presents itself as a skeptical inquiry into new art forms, especially time-based social practices. It contains a manifesto, by Joerg Becker and Irena Knezevic, but “Blast Counterblast” doesn’t congeal into a movement or treatise the way that “Blast” and “Counterblast” did, instead acting as a curated sourcebook of countercultural (read: odd) inspiration, on topics ranging from animals and children to art theory and anal sex, reflecting the passionate, open and curious attitudes of our creative generation.

While Triple Canopy is looking back to ink-and-paper technology, and many artists are filling up on nostalgia for primitive Internet technology (such as 256-bit animations and clip art), Molly Springfield is looking at the proto-history of the Internet. For an essay published on Triple Canopy in 2010, Springfield assessed the ill-fated life work of Paul Otlet (1868–1944), who she calls “the kooky grandfather of the Internet.” His Mundaneum was an attempt to store, classify and access humankind’s wealth of knowledge. He produced twelve-million index cards, housed in card catalogs, before the Mundaneum lost support and he spun out. Nobody could figure out how Otlet’s information cards could be collectively accessed. It was deficient because the electronic network that Otlet envisioned was born decades after he died. 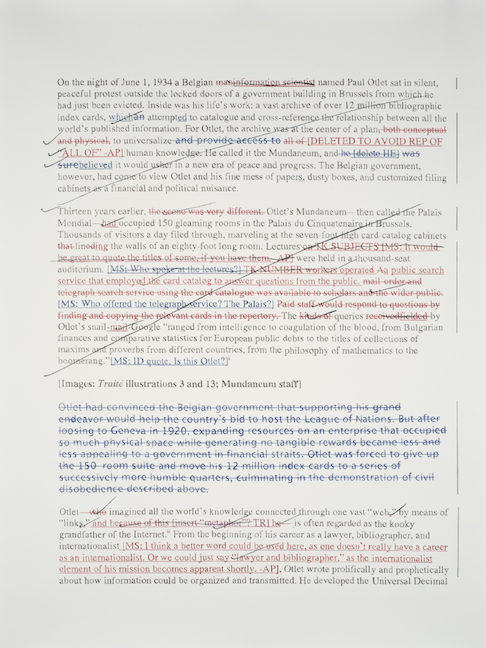 Molly Springfield, from “The Proto-History of the Internet”

Springfield decided that Otlet’s endeavor was fraught not just by being hatched too soon, but because his methods were insufficient to inspire users and audiences. She writes, “People have a limitless capacity to shake off established categories and forge previously overlooked connections between ideas. Otlet’s tendency to neglect these possibilities—his unyielding devotion to universal classification—was his greatest limitation.”

To resurrect Otlet without going so far as to implement his Mundaneum, Springfield has produced a series of drawings based on Otlet’s diagrams and writings. Springfield draws precisely, with graphite on paper, copies of texts in a trompe-l’oeil style that perfectly reproduces mechanical typography and its messages. As a form of critique, Springfield cannibalizes her own Otlet research by reproducing her Triple Canopy essay as a Word document with editor’s marks before it went online. She evacuates one of Otlet’s diagrams, such that his Bibliography Pyramid is transformed into a geometric abstraction, which Otlet might think to be deficient, practical man that he was. None of this makes Otlet more accessible. Springfield’s drawings confuse Otlet’s legacy as if his own card catalog were emptied into the wind. Are we chained to our technology, or freed by it?

Molly Springfield’s “The Proto-History of the Internet” shows at Thomas Robertello Gallery, 27 North Morgan, through August 18.