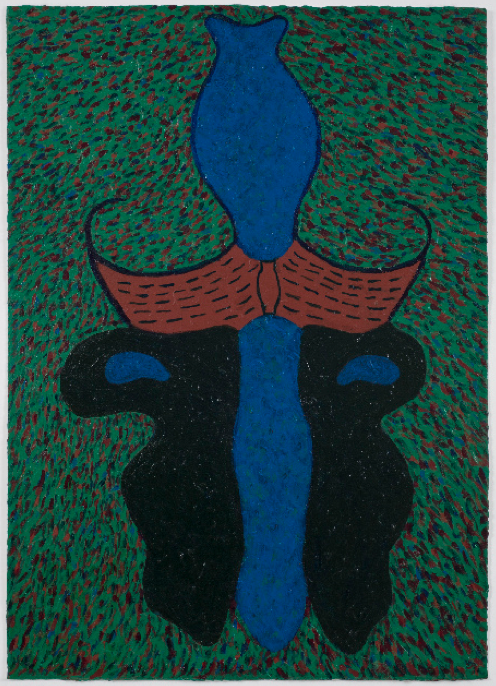 It’s hard to figure just what Claire Wolf Krantz, Susan Sensemann and Michiko Itatani have in common other than living, teaching, and art-making in Chicago for the past thirty years—and, most importantly, each has consistently followed her own inner voice wherever it might lead. Claire Wolf Krantz, a critic and curator as well as artist, has now ventured into bold, symmetrical, bio-form designs that are not especially attractive, but do seem to assert the blunt resiliency of the life force that is going to keep thumping away regardless of any human intentions or understandings. Mostly, she employs large, simple shapes in these nine, unframed paintings of acrylic on paper. But in the ninth, she builds up to a feverish, complex intensity worthy of a Tibetan mandala. Meanwhile, her longtime friend Susan Sensemann, professor emerita from the University of Illinois, has moved into fabrics. She doesn’t weave them; she paints them with acrylic ink onto paper or canvas in a virtuosic display of craftsmanship. The illusionary effects are magical, and one imagines that if these were real fabrics that could be thrown over the shoulders, amazing things might happen. The undulating weaves feel at least as ominous as they are attractive, and like the tunic that Deianeira wove for Hercules, the consequences of wearing them might not be what you would have chosen (the son of Zeus burst into flames). The third artist is Michiko Itatani, longtime professor at SAIC who is showing some of her “hyper-baroque” drawings of a fanciful seventeenth-century astronomical observatory, as well as an installation of odd-shaped paintings made over the last twenty years. They feel like sculptural fragments of broken, glazed pottery, both in surface and depth, and are scattered across the entire south wall of the gallery in a spinning pattern resembling either a distant galaxy or a complex organic molecule. Unlike many of her earlier such installations, nothing from the human body can be identified. 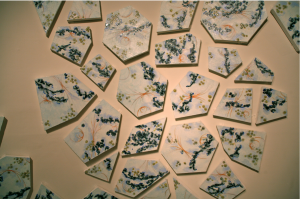 Though their artistic paths have been quite different, these three wise, successful women do seem to have come to the same conclusion: We live in an amazing, wonder-full and dynamic universe. But mankind doesn’t necessarily have a proper place in it. (Chris Miller)

Through June 10 at the Ukrainian Institute of Modern Art, 2320 West Chicago