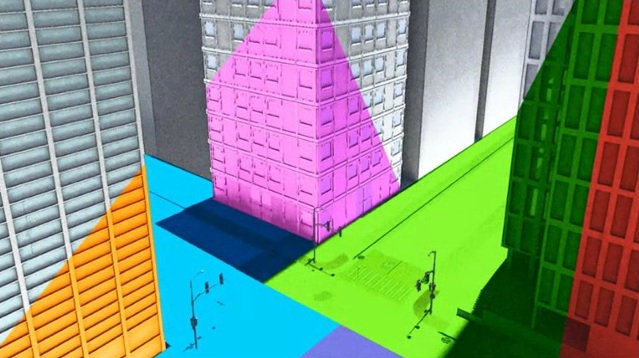 Last autumn I asked Jessica Stockholder if she wanted to contribute, along with twenty-six other Chicago-based artists, to “Imaginary Monuments for Chicago,” an artists’ project of radical, experimental and non-disappointing designs for public sculptures, to be published in Newcity. I wondered if the new chair of the University of Chicago’s Department of Visual Arts might have an early viewpoint of her new home, but Stockholder politely declined. Now we can see Stockholder didn’t need to create an imaginary public art proposal, as she was soon to be working on a very real one. “Color Jam,” commissioned by the Chicago Loop Alliance, selectively covers the streets and buildings at State and Adams with enormous sheets of colored vinyl. The realization of “Color Jam” demonstrates an exact issue that the “Imaginary Monuments for Chicago” project interrogated: Artists dream bigger than the city can deliver.

The early sketch for “Color Jam” depicts a dynamic sculpture on the scale of Christo and Jeanne-Claude’s infamous wrapping works. Stockholder’s ambitious sketch shows a site-specific, hard-edged abstract painting that both obliterates and enhances the streets, sidewalks and buildings. On site, “Color Jam” is an entirely different type of spectacle, more parade than perceptual rupture. For what is being billed as the largest public artwork ever installed in Chicago, “Color Jam” is simply too small. One is not immersed in color, but dips a toe in it. The colors—blue, green and red—are ordinary. Too many elements—planters, windows, asphalt, signs—are left uncovered.

“Color Jam” was primed to make a significant contribution to Chicago public art. Other than Walmart, there may be no patron more befitting of a Stockholder work than the Chicago Loop Alliance (CLA), a business advocacy group that supports contemporary art in the service of commerce. Stockholder’s great strength as a visual artist is to transform familiar consumer products, such as colored plastic novelties and Home Depot hardware, into wonderfully disruptive perceptual experiences. Brazenly, the CLA tapped a leading critic of consumerism for their project, but “Color Jam” doesn’t perform a Stockholder-style transformation. 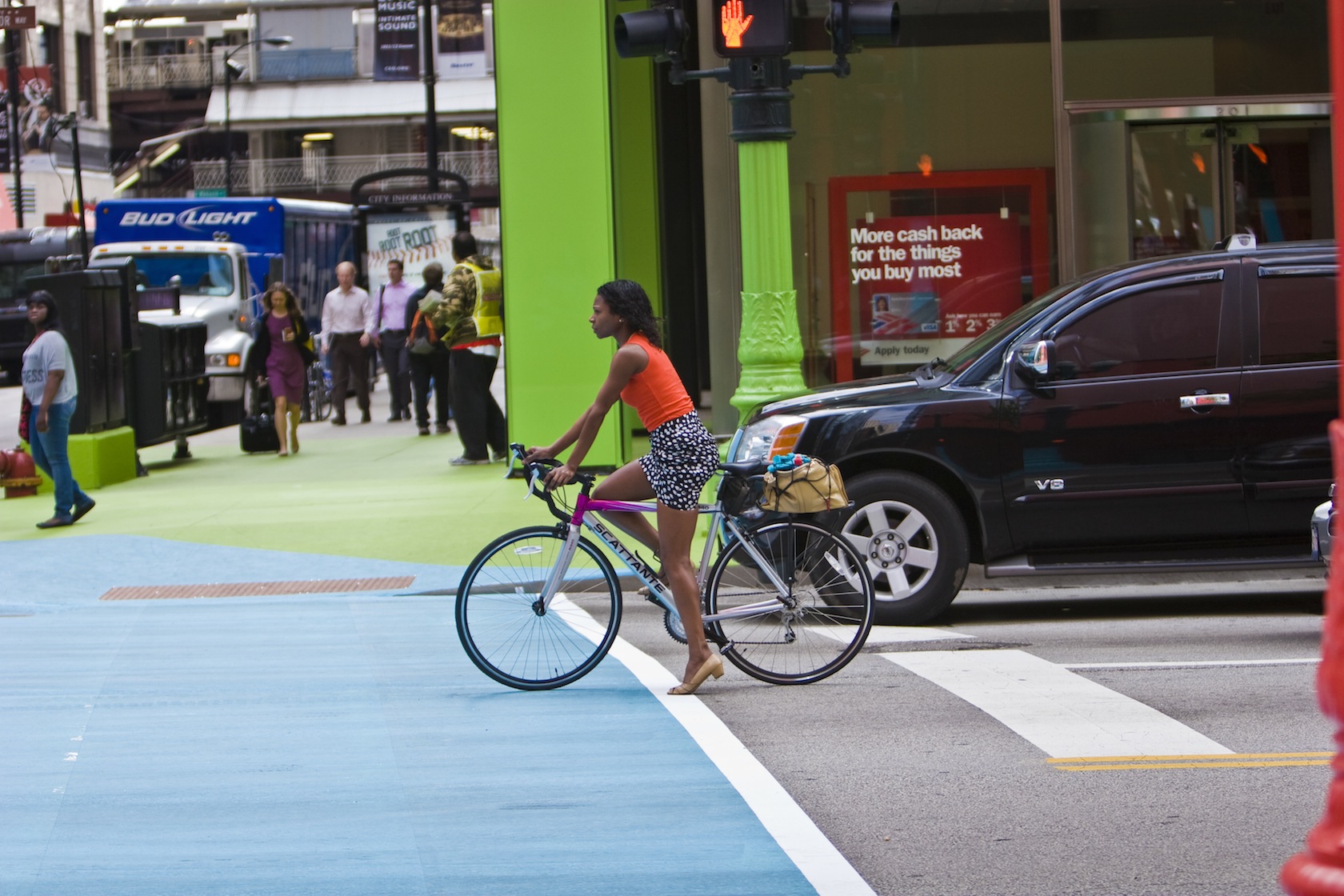 So, what happened? For all of its positive support of local artists (past projects have patronized Tony Tasset and Kay Rosen, as well as the successful Pop-Up galleries), I don’t think the CLA fully trusts the instrument of art. An ideal collaboration between the CLA and Stockholder would challenge viewers’ expectations of window-shopping, advertising, product placement and brand loyalties. But the committee clipped Stockholder’s initial vision here and there so that the color wrapping quits its creeping erasure of public space at important junctures, serving to frame Bank of America and Starbucks logos instead of toying with them. These edits of the original design accommodate public safety (mandatory) and the CLA’s member businesses (mistake).

Let’s imagine that “Color Jam” is actually an extreme artwork, one that entirely shrouds the intersection’s businesses and logos with colored vinyl, temporarily altering our expectations of this usual place. Such a strategy would not undercut the CLA’s mission as a business advocate. Instead, this would shock pedestrians from visual (and consumerist) complacency, as if to say: we know how vital Starbucks, CVS and Bank of America are to your routine, and now you must rediscover them. My complaint isn’t that corporations are anti-art (in fact, Illinois-based companies, from McDonald’s to Playboy, have regularly purchased contemporary art). Ultimately, I’d like to see a company use art to question itself rather than decorate itself.

Colored vinyl wrap is already a commercial technology, and in Stockholder’s hands one hopes the material can challenge itself. In one small moment in “Color Jam,” it does. The brightly colored vinyl remakes the Art Nouveau metal bases of the State Street lampposts into cheap plastic toys. This witty transformation serves to question our civic mythology—specifically, how we value and mobilize Chicago’s design history as a self-identity. The vinyl only goes halfway up the lampposts—why?—and stops short of prompting other worthwhile questions.

The Times-Square-ification of State Street is starting to look like a big, ugly collage. At State and Adams, “Color Jam” is forced to compete with the insipid musical probes called “Lightscape” (also a CLA creation), which pump top-forty hits into the air like a grocery-store soundtrack, and previous efforts to shroud the architectural blight, such as a hypnotic graphic pattern on the scaffolding of The Century Building, the winner of a beautification contest years ago that has stayed ever since. 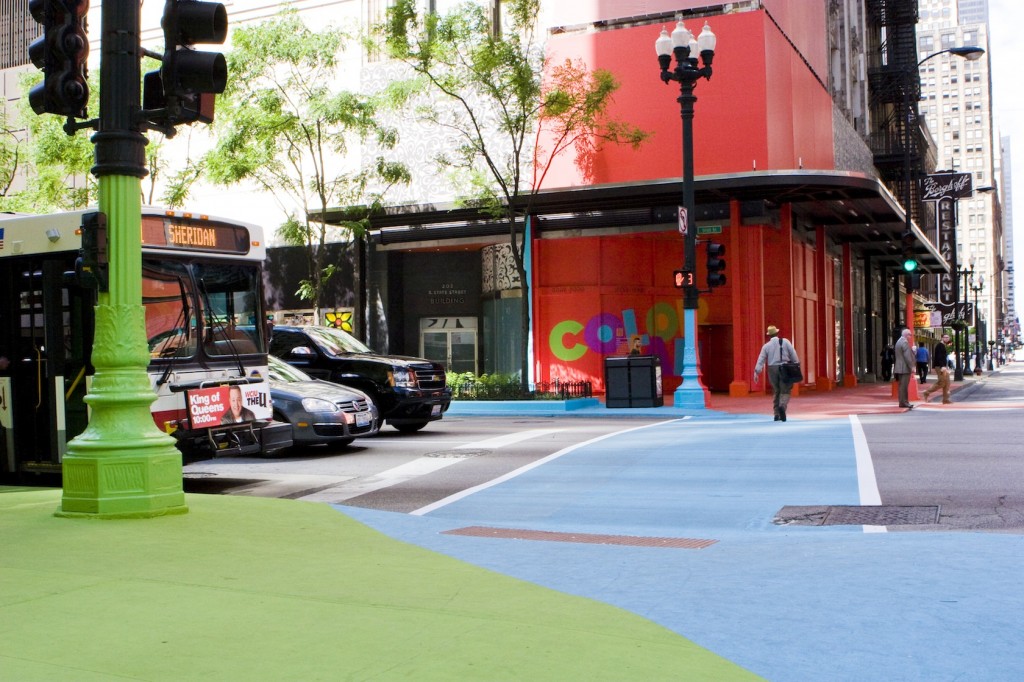 I like how “Color Jam” is already filthy, just days after installation was completed. It’s a blank canvas painted by the crap we carry and drop and the rotten gray junk that swells from the city’s pores. Dear CLA, don’t clean this artwork. The realism of the city is collaborating with the fake fantasy of “Color Jam.” Walk down State Street and you’ll see that the real color jam is the brew of broken faces, quirky characters and off-color costumes, each in its own way fighting or affirming entropy.

Next year, the CLA should stop trying to overpower us with art. Instead, give us small gestures and subtle tweaks. Infiltrate our consciousness (it works well for advertisers); don’t clobber it. Right now the CLA has more power to facilitate public art than the City of Chicago, which itself may be moving in the direction of a privatized public art program. The CLA is in the perfect position to empower its audience, and we’re hungry for it.

“Color Jam” is on view through September 30 at State and Adams Streets.