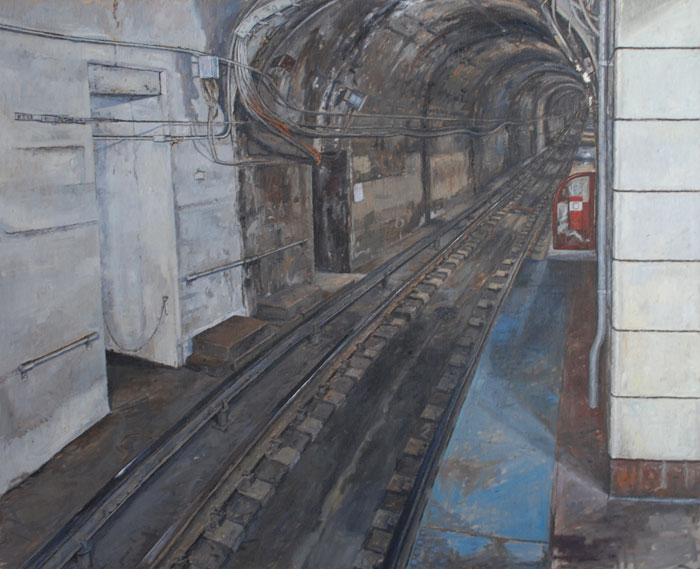 Chicago subway stations may be nasty, but they do their job, and the same could be said for Andy Paczos’ on-site paintings of them. Of course, the best part of any transit platform is the wildly diverse humanity passing over it, and Paczos only worked in these spaces when they were deserted. Nor did he depict any of the signage or commercial billboards. What’s left feels strictly industrial, with a kind of creepy loneliness that makes you wish you had taken a cab. But the visual contrasts he creates make this visit quite exciting. On the one hand, there’s that deep tunnel that shoots the eye back into space, and on the other, there are all the cracked, mottled, corroded, delicious/disgusting surfaces that interrupt it. And then there’s the dampness, so palpable you can smell it—which is how it should feel when you’re thirty feet underground.

One thing that students of European art history may note is that Paczos does not apply the receding orthogonal straight lines of an Albertian picture box. As in the fifteenth-century miniatures of Jean Fouquet, all lines curve away from the point-of-view, so that the viewer, just like the on-site painter, feels isolated and completely encompassed by the surroundings, making for a private, contemplative experience in a very public space. The strong sense of distance offers some relief from the chthonic experience of being buried alive, and the occasional touches of strong, primary colors keep things cheerful, perhaps too much so.

An entire gallery of these paintings can be a bit overwhelming, perhaps making you long for the sound of approaching trains. But each one can command attention by itself, and seems to inspire a meditation on the great human effort required to keep these places orderly and functional despite the irresistible forces of decay. They exemplify the motto “The City that Works,” and encourages a kind of blue-state respect for the people who keep it so. (Chris Miller)