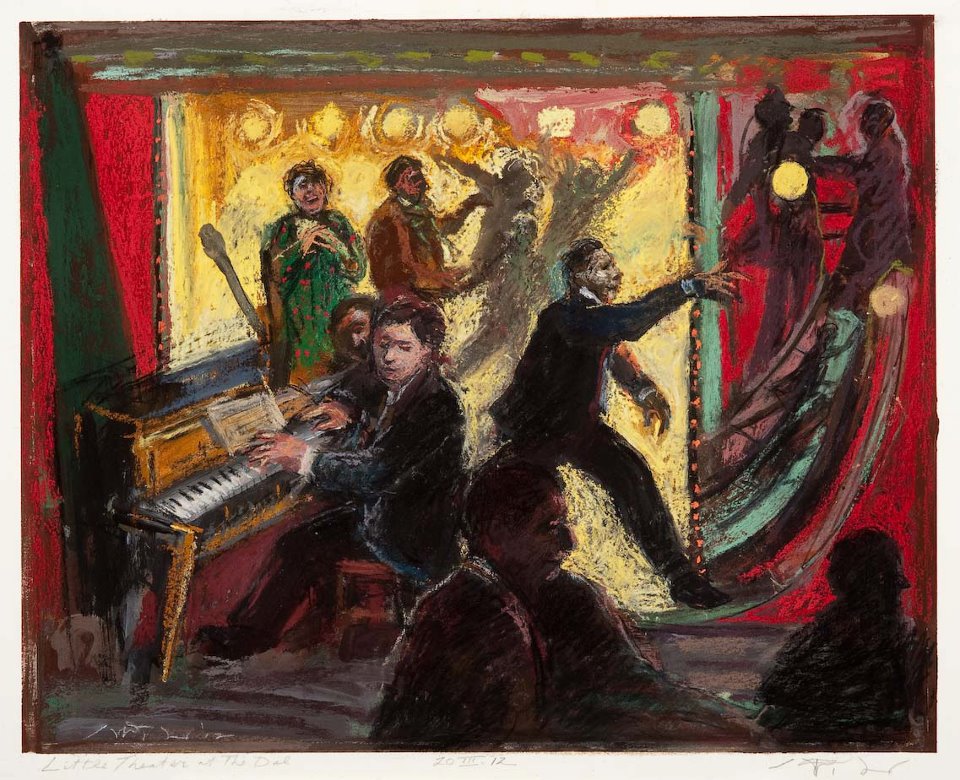 In a world dominated by the commerce of self-gratification, skepticism is more appropriate than belief, so serious mythology has been absent from American art for more than sixty years. But even if religious and social idealism have been franchised by the crackpot fringes, one can still be idealistic about skepticism itself. In the history of Chicago, the Dil Pickle Club (1917-1935) may serve as the preeminent shrine of freethinking, or, at least that’s how Robert Barnes has envisioned it, in fourteen pastel drawings that sanctify the un-sanctimonious and its ne’er-do-well impresario, Jack Jones. Jones is a rather unlikely hero, a professional anarchist who blew off several fingers in the preparation of explosives, and who seems to have failed at everything other than attracting iconic writers like Upton Sinclair, Sherwood Anderson and Carl Sandburg, as well as whores, grifters and street performers to his low-rent, high-brow salon and theater.

What characterizes Barnes’ visions are figurative gestures encompassed by a jumbled geometry of triangles and circles that just barely keeps the centrifugal energy from spinning out of control, making these carnival-like scenes feel like episodes of mystic revelation, even if Jack Jones is more clown than prophet. There’s even an episode that puts him out among the tempestuous waves of Lake Michigan—but rather than performing a miracle, the story goes that his homemade boat capsized and his just-married wife drowned. Even if his life is a catalog of failures, the human spirit seems to be triumphant, just as in the tragic stories told in great literature, and it’s a lifetime interest in literature that brought Barnes to the Dil Pickle in the first place. Indeed, the scenes feel like the mind’s eye view of a modern novel where more is happening than what you can ever comprehend. But unlike most of Chicago Imagism, the mystery feels more intriguing than ominous, and the viewer is invited to be a pilgrim rather than a psychotherapist.

Barnes often works large enough to bring his aggressive chaos into your personal space, as exemplified by his 2010 show. The current smaller pastels are closer to the scale of book illuminations, and they share the vigor, charm and luminosity of some of the fifteenth-century masters—although it’s questionable whether the antics of Jack Jones are as worthy of illumination as the lives of kings, saints, and prophets. Does all this sound and fury really signify anything more than a romantic nostalgia for a free-wheeling creativity that can always be found if you know where to look for it? (Chris Miller)

Through July 7 at Printworks, 311 West Superior