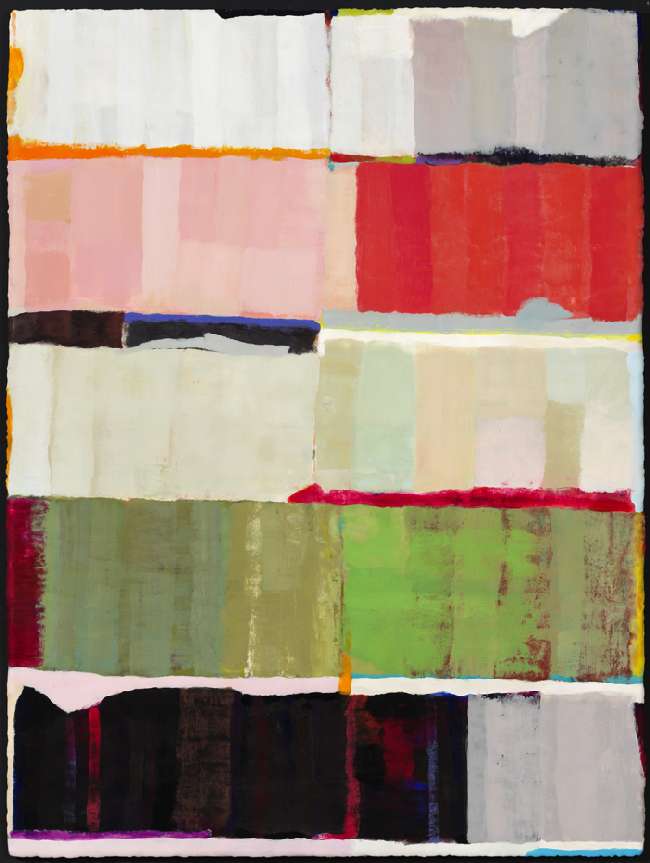 A friend thought I was crazy when I showed him this show’s website and told him it was the first time I ever wanted to buy everything off a gallery wall and live with it happily ever after. On a computer screen, these pieces might look sloppy and tedious. But up on the wall, with the exact colors, surfaces and sizes as designed, they’ve got that level of visual ecstasy that an oriental potentate might require for those gilded-cage apartments whose elite inhabitants never get to leave. And not surprisingly, the artist, Kathleen Waterloo, began her creative life as an interior decorator before going back to school, years later, for fine arts. Her work could still be called decorative, but it’s too intense to stay in the background, probably because she consistently presents herself with new problems. In this series, Waterloo began with graphs and charts found in various trade publications with subjects like “Airline Fuel/Fare Economics” or “Mayor Daley’s Popularity Poll.” Then she translated these haphazard bar graphs into what she calls “architectural fantasies.” And indeed, their brick-like structures do look very much like parts of a wall, which in other times and places might have been covered with ornate ceramic tiles. The glowing, translucent surfaces of her chosen medium, beeswax encaustic, is very similar to high-fire glazes, but her control and range of colors is much greater, and the process allows for continuous adjustment during fabrication as she moves her eye around the grid, teasing one pattern with another. Each colored, sometimes misshapen, cell feels like a distinct personality that keeps its eccentricity while it somehow gets along with its neighbors. Isn’t that the kind of world in which we would all like to live? The artist says that she works on each piece until it makes her feel happy. They give me the same feeling, too. (Chris Miller)