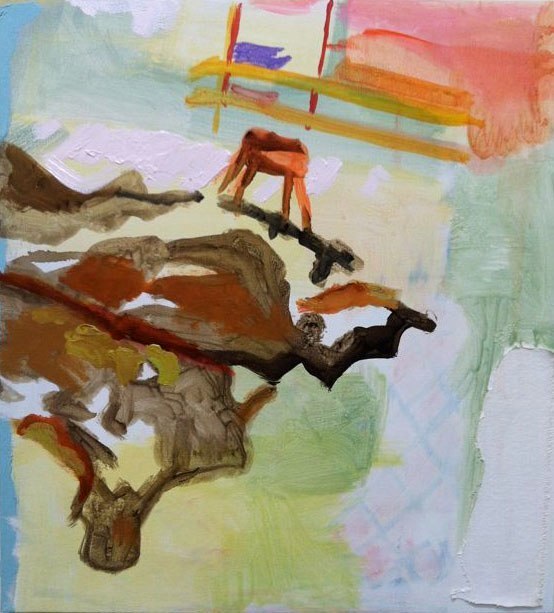 Andreas Fischer is known in Chicago as a true painter’s painter, making works whose emotion, intimacy and presence are as important as they are often ignored in favor of firmer topics of discussion. Confronting the mechanical from the title on, the exhibition “Robots Will Keep Us As Pets” forces the issues by placing his work in the context of four other painters who, like Fischer, exhibit the irreplaceable human qualities inherent to a painting practice. While Fischer is by far the most free from the formal predeterminations which define mechanical production, each of the painters showing with him—Chicago’s Sofia Leiby, Trew Schriefer, Ariel Dill and Amanda Dalton Innis—make works driven by the painter’s sensitivity for materials, an aesthetic “just-right” mode of composition, intuitive harmony of colors and the seen-yet-indefinable importance of touch. The emotional potential of painting is slippery, highly subjective, and opens into a vulnerability of feeling feelings. It would be a mistake to say that some works are emotive and some aren’t. Any painting has its vibe, and a quick tour through the Museum of Contemporary Art can produce a small galaxy of resonances (enabled by ignoring the wall text, and sensually heightened by a skipped meal, a sleepless night, or a breath of complicated air). Possibly the most musical of static art forms, the stains and strokes of a painting still have the potential to produce emotional experiences, and given the evidence of a mind and body at work, we may feel from a work as well as about it. If that all sounds ooey-gooey, oh-so Ab-Exy, perhaps it is meant to be: in an aesthetically cold contemporary era of grids, balance and an increasingly self-similar culture of design language, the fleshy unpredictability of the human artist, central and celebrated in “Robots Will Keep Us As Pets,” proves a refreshingly personal change. (Steve Ruiz)