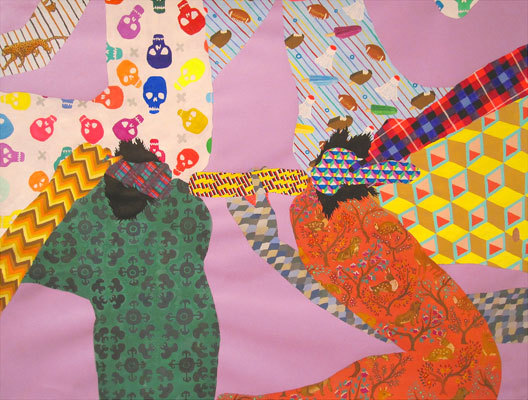 Mark Aguhar’s art is a loud declaration of her being. She was, in her words, a “genderqueer person of color fat femme fag feminist,” and tried figuring out where such a person fit in this world. Aguhar, twenty-four, was an MFA candidate at UIC when she committed suicide back in March. The outpouring of grief was widespread—not just her friends in Chicago, or their hometown of Austin, but Choire Sicha paid tribute on The Awl, which he co-founded. A group of local friends have put together a tribute of their own at Gallery 400, showcasing Aguhar’s work as well as work inspired by her.

Most of the artworks in the exhibition are paintings by Aguhar, or video loops from her Youtube channel “xEmoBoy1987x.” The most interesting pieces are the ones that are tactile. Many of Aguhar’s blog posts are collected in a zine visitors can take called “CalloutQueen” (named for her Tumblr). Another zine made by friend Steve Hnilicka is a collection of text messages sent between the two. Visitors can also build their own zine called “Houndstooth” out of pages filled with memories and poems inspired by Aguhar. There are also dresses made by her in a series called “Making Looks,” and a book of dedications by Kasia Houlihan, nothing but pages dedicated to loved ones that one can only open while wearing delicate knitted gloves.

The paintings in the exhibition touch on the topics of gender and love. There are prints of a pair of lips mouthing, “I love you,” and bearing slogans like, “I’d rather be beautiful than male.” In one unassuming corner is a piece that looks like a shrine to Aguhar. There are cards, candles, books and trinkets of importance. Everyone involved is still mourning, and expressing it through art—from one artist to another. (Robert O’Connor)