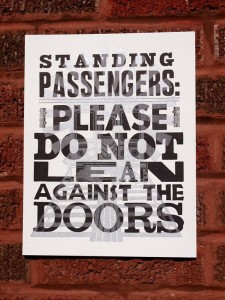 By Desiree Cole
Marnie Galloway thought one of the best aspects about the CTA was its sheltering quality when she first moved to Chicago.

When the temperatures were boiling in the late spring of 2007, at one point, “The wind was throwing around such a dust storm that we had to lean into the wind that was stinging our eyes with sharp dirt,” says Galloway. “I was terrified we were moving into some kind of horrible post-apocalyptic hellscape,” she says.

But she remembers the path up to the train platform when she first rode the train in Chicago during that storm. “My first impression of the CTA was mostly one of relief from the weather, which to be honest, has remained a regular feeling,” she recalls.

Stepping into the train, she heard the charmingly flat inflection of the female voice-over announcer for the first time, a voice she would come to appreciate deeply. “Attention CAH-stomers,” Galloway mimics. “I repeated that to myself a lot. Just the way that female voice said that word: CAH-stomers.”

She decided to scribble down each series of announcements in her notebook and turn them into prints.

“I recognized the repetitious and polite imperatives on the train as having that potential for holding memory. It’s a thing we’ve all passively listened to on our commutes or late-night wanderings. That, and I thought it would be funny to elevate that kind of background status to frameable, hand-printed pieces of art,” she says.

Galloway experimented at the Columbia College Chicago Interdisciplinary Book & Paper Arts program, then interned for a year at Starshaped Press in Ravenswood, a press shop owned by Jennifer Farrell. “She is a world-class designer and has dedicated her commercial and creative practice to keeping old-school, original letterpress craft alive, working exclusively with hand-set antique wood and lead type and hand-carved blocks. More than that, she worked hard to build a community of women printers and makers in the area, creating a safe space to talk about life and the hard work of making things,” says Galloway.

Letterpressing involves a lot of careful planning and laying of wooden blocks.  “I hand-carved the train design from a block of mounted linoleum, cutting away the negative space so that the remaining block would be raised enough to catch the ink,” Galloway says. “But once the train was printed, I set the type, which was designed using antique wood type and ornaments from the Starshaped studio collection I worked at. That means that each color—each layer—of each print is a separate pass through the hand-cranked press. The more colors and layers, the more labor and room for error. It’s a labor-intensive process, but produces really crisp and beautiful results,” she says.

“I like how democratic the process of letterpressing is. Instead of one precious object of which I felt very personally protective and possessive, I could make multiples enough to share with friends,” says Galloway.

Galloway’s lived in Virginia, Alabama, North Carolina and Arkansas, although she spent the majority of her time in Texas. She describes the lifestyle in Texas with several small-town suburban neighborhoods, driving everywhere and staying out of people’s business. “I spent all my time inside reading and playing chess and daydreaming about growing up to be either James Audubon or Madeline Kahn. I really wanted to be Madeline Kahn. It didn’t work out,” Galloway laughs.

When she moved to Northampton, Massachusetts at sixteen to attend Smith college, she found a core group of whip-smart, hilarious and deeply engaged women. “Northampton was like a small-town New England—the town itself was walkable, but a short drive away were lots of other small towns,” says Galloway.

Later, she followed her boyfriend to Chicago. Galloway knew she wanted to pursue a path in the arts and knew Chicago was a strong arts center. “But to be honest, my understanding of the city’s broader offerings were purely drawn from movies. If it wasn’t in the ‘Blues Brothers’, ‘Wayne’s World’ or ‘Ferris Bueller’, I didn’t know about it before unpacking my car into my Rogers Park apartment. I didn’t expect to be so utterly charmed by the city I discovered,” says Galloway.

After many moves, Galloway noticed that a lot of what she remembers fondly about each place is its ubiquitous, static background sounds.”The stuff you otherwise ignore,” she says. “The smell of an overused industrial floor cleaner, for instance. Few things put me back into my years in Huntsville, Alabama like the television commercial jingle for the local exterminator—in spite of the years, it still gets stuck in my head.”

See more of Marnie Galloway’s work at monkeyropepress.com or visit her Etsy store to see works for sale at etsy.com/shop/monkeyrope. Prints from the CTA Announcement Series, 8.5″ x 11,” are $20.

[…] every day. The one for yesterday was new, I think — check it OUT!! And then subscribe. Also, here’s a new profile of Marnie in Newcity Art. Always love it when she gets […]