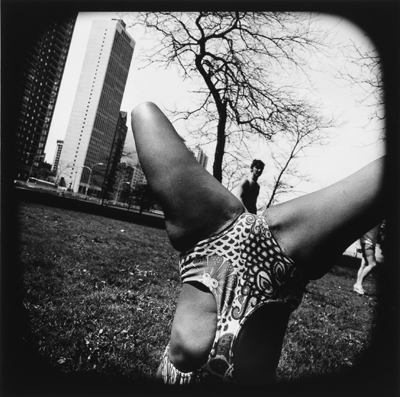 Chicagoans know how to get down and dirty, at least they did in the 1970s when Charles Traub shot them in black and white on the sweet city’s beaches. It was summer and it was hot, and we know what that means for lakefront habitués. Our forebears had shed their second skins and more importantly their inhibitions. At the same time, the hardcore Chicagoan doesn’t vogue, so Traub stalked his prey and went in fast capturing priceless scenes like a man standing over a young lady, drawing down his bikini swim suit as she lay in readiness. Who knows what might have happened, but Traub has shown us the spirit of the times and that is enough to slake any curiosity. The black-and-white aesthetic makes Traub’s images throw us back to a time that at least seems different from ours, when affirmation of the body, in whatever shape it was, could be celebrated unreservedly. How much does that still happen? (Michael Weinstein)